I'm delighted to be taking part in the blog tour for Joseph Barnaby by Susan Roebuck and sharing an extract from the book today. There is also a great giveaway to enter but first of all let's take a look at the description... 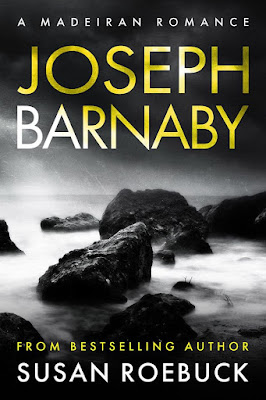 By standing up for his principles to save the life of a prize racehorse, farrier Joseph Barnaby loses everything. Now, a personal vendetta has become too deep to fight and he escapes to the island of Madeira where he finds work on a small farm at the foot of a cliff, only accessible by boat. The balmy climate and never-ending supply of exotic fruit, vegetables and honey make it sound like paradise but, for Joseph, it’s the ideal place to hide from the world. Can the inhabitants of Quinta da Esperança, who have more grit in them than the pebbled beach that fronts the property, help Joseph find his self-worth again? And can he escape the danger that draws ever nearer?

Sofia, one of the protagonists, is at home on the  farm that she shares with her uncle and aunt. She hasn’t met Joseph Barnaby yet.

Inside the cool farmhouse she drank a glassful of fresh lemonade. The place smelled as if her aunt was making tomato rice for dinner. She peeked at a row of small fish sitting on a plate, ready to be grilled. Just as she thought: chicharros. Her uncle had been fishing off the jetty again. He knew she liked them better than sardines.
Her aunt came in to check the rice pot. The new man came just in time for the grape harvest, her aunt signed, gesturing with her head towards the main vineyard, where, presumably, she knew the said man was working. We’ll be busy. Can you lay the table for four? And your uncle picked some lovely mangoes this morning which he took with the vegetables to town. I kept a couple for dinner.
On the patio Sofia laid the old wooden table, covered with its washable plastic cloth. Her aunt came out and joined her, bending to weed her clay pots of orchids and geraniums dotted around the doorstep on the cobbles.
Is he having meals with us? Sofia asked, knowing he would, because the previous farm-hand always did.
Her aunt nodded, picking dead flowers off a burgundy-red bougainvillea that crept up one wall of the farmhouse.
Sofia took the fragrant golden mangoes into the cool interior. Hopefully this farm-hand would be more honest than the previous one, who secretly set off at night in the boat loaded with her uncle’s vegetables, bananas, figs, sweet potatoes and passion fruit, all of which he apparently sold to a different restaurant further down the coast. She still thought Tio Fernando should’ve got the law on the man instead of just sacking him. Tio said as soon as word got out that the guy was a thief there’d be no work for him anywhere, probably not even as far as Funchal. Lord, he’d end up having to leave Madeira Island altogether.
The new man’s English, her aunt signed, and then held out a bowlful of shiny black-shelled limpets. He’s been on the rocks this afternoon, prising these off. Beauties. She poked them with her finger. Surprised he knows what they are, being foreign.
“Very good,” Sofia mouthed back before signing, As long as he leaves my hives alone. Foreign, is he?
Yes. His name’s… Her aunt put the bowl down by the ceramic sink and pulled out a piece of paper from her apron pocket. She showed it to Sofia, who read the words Joseph Barnaby.

I was born and educated in the UK (I am British!) but now live in Portugal. I've been an English teacher for many years with the British Council and also the Portuguese civil service where I developed e-learning courses.

My first love is, of course, my husband, my second writing, and my third painting. And now I have time to be able to indulge in all three.

My debut novel, "Perfect Score" was published by Mundania Press on Sept 21, 2010 and the paperback launched on May 11 2011. It was a finalist in the 2012 EPIC e-book Awards in the Mainstream Category.

My second novel is a dark thriller/fantasy called "Hewhay Hall". It won an EPPIE award in the 2013 EPIC (Electronic Publishing Industry Coalition) e-Book Awards in the Horror Category.

Next comes "Rising Tide", published in 2015. Set in Portugal, published by Mundania Press. It is set in a tiny fishing village that the world, and most of Portugal, has forgotten. Read about the wonders of the ocean and see if Piper from Norfolk UK and Leo from Alaska, USA, can find what they're searching for in the little village of Luminosa.

"Forest Dancer" was published on 20th February 2018 by CrookedCat Books. This is novel number 2 set in Portugal but this time in the forests outside Lisbon, Portugal. Instead of the sea (as in Rising Tide), now find out about the wonders of the forest and whether classical ballerina, Flora, can find what she's searching for in the small village of Aurora.

On 5th October 2018 CrookedCat Books published my newest novel, "Joseph Barnaby", another romance/suspense which is set on the island of Madeira.

*Terms and Conditions
Worldwide entries welcome.  Please enter using the Rafflecopter box below.  The winner will be selected at random via Rafflecopter from all valid entries and will be notified by Twitter and/or email. If no response is received within 7 days then I reserve the right to select an alternative winner. Open to all entrants aged 18 or over.  Any personal data given as part of the competition entry is used for this purpose only and will not be shared with third parties, with the exception of the winners’ information. This will passed to the giveaway organiser and used only for fulfilment of the prize, after which time I will delete the data.  I am not responsible for despatch or delivery of the prize.