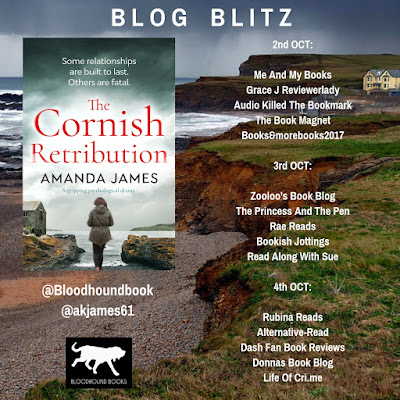 I'm delighted to be one of the stops on the blog tour for The Cornish Retribution by Amanda James and sharing my review today. First of all though let's take a look at the description for the book... 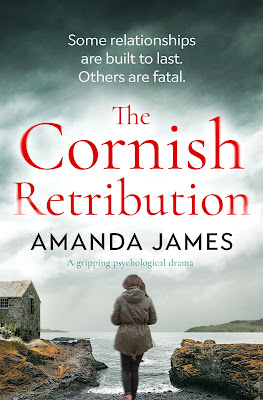 After a tragic car accident, Samantha is left widowed and bereft.  Her husband Adam was everything to her. But at least the home they shared together in Cornwall provides her with some security. Or does it?

Upon returning from a school reunion in Sheffield, where Sam met her old friend, Penny, and an old flame from her school days, Dan, she discovers that Adam had invested money unwisely and she is now penniless.

When Penny and Dan, who are now married, arrive in Cornwall to visit Sam, Dan comes up with a way in which Sam can keep the house. He suggests she turns it into a writing retreat. And he is willing to invest.

Despite his wife’s reservations, Dan gets his way but at what price?

Why is Dan so keen to help? Has Sam put herself in harm’s way?

Some relationships are built to last. Others are deadly.

The pacing of the story is steady but easily kept my attention throughout with some very interesting twists and surprises. I have to say that the build up in this story was great and written in such a way that kept me turning the pages. Providing an underlying tension beginning when Sam meets up with her old friends Penny and Dan. As they reconnect I was looking forward to seeing where the story would go next.

The characters are developed well and it was very easy to be pulled into their lives. It's safe to say that this group of characters have their flaws and at times I was definitely questioning their actions and responses. However I find that if a character has some unlikeable qualities it can make them all the more interesting. This is never a bad thing for me as it makes me feel even more involved in the story wondering what they will do next! I have to mention the setting for this book as it added a kind of wildness to the story and created a perfect backdrop for the events in the book.

With lies and secrets around every corner, this story is dark and twisty!

With thanks to Bloodhound Books for my copy. 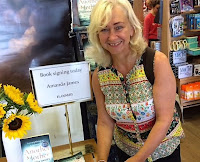 Amanda has written since she was a child, but never imagined that her words would be published, given that she left school with no real qualifications of note apart from an A* in how to be a nuisance in class. Nevertheless, she returned to education when her daughter was five and eventually became a history teacher. Then in 2010, after many twists and turns, the dream of becoming a writer came true when her first short story was published. Amanda has written many short stories and has six novels currently published.

Amanda grew up in Sheffield but now has realised her lifelong dream of living in Cornwall and her writing is inspired every day by the dramatic coastline near her home. She has sketched out many stories in her head while walking the cliff paths. Four of her mystery/suspense novels are set there, Somewhere Beyond the Sea, Summer in Tintagel, Behind the Lie and Rip Current. The Cornish Retribution is also set in Cornwall and will be published by Bloodhound Books in October 2018.

Amanda, known to many as Mandy, spends far more time than is good for her on social media and has turned procrastination to a fine art. She can also usually be found playing on the beach with her family, or walking the cliff paths planning her next book.