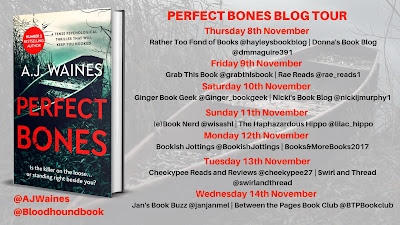 Thank you for stopping by I'm thrilled to be one of the stops on the blog tour for Perfect Bones by A.J. Waines and today I will be sharing a fabulous character spotlight. First of all though let's take a look at the description for the book... 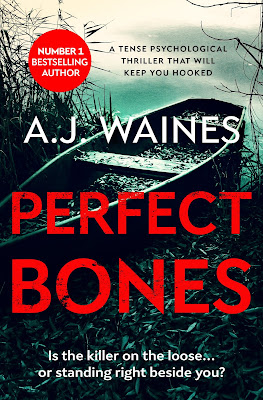 Is the killer on the loose…or standing right beside you?

When art student, Aiden Blake, witnesses a gruesome attack on a London towpath, the police need him to identify the assailant without delay. But there’s a problem: refusing to leave his canal boat and traumatised by the shock, Aiden is rendered mute by the horror of the event and can’t speak to anyone.

In a desperate bid to gain vital information before Aiden’s memories fade, The Met call in Clinical Psychologist and trauma expert, Dr Samantha Willerby, giving her only seven days to get a result. When Aiden finally starts to communicate through his art, however, the images he produces are not what anyone expects and before Sam can make sense of them, another murder takes place.

With her professional skills stretched to the limit and the clock ticking, Sam strives to track down a killer who is as clever as she is – someone who always manages to stay one step ahead.

The third book in the Samantha Willerby series, Perfect Bones is a tense and creepy psychological thriller that will send your pulse racing. It can easily be read as a stand-alone novel and will appeal to fans of authors like Nicci French, Mark Edwards and Lisa Gardner.

Perfect Bones is the third psychological thriller, by AJ Waines, led by her series character, a gutsy amateur sleuth, Samantha Willerby. Sam appears in two other psychological thrillers, Inside the Whispers and Lost in the Lake, both just released in October 2018. All AJ’s books can be read as standalones, in any order.

So, who is Samantha Willerby and why will readers want to root for her? AJ takes it from here…

Who is your series lead character?
Name: Dr Samantha Willerby (Sam to her friends, Sammie to her best mate)
Job: Dr Sam is a clinical psychologist in an NHS hospital in London - a trauma specialist for victims who’ve been caught up in shocking incidents. As well as offering ‘talking therapy’, Dr Sam helps patients recover memories of their chilling experiences. Sam’s intrepid nature, her professional curiosity and drive to get to the bottom of things inevitably lead her into situations where she finds herself seriously out of her depth…
Role: Sam unwittingly becomes an ‘amateur sleuth’ as she tries to unravel the deadly mysteries she’s faced with in this series. In Perfect Bones, the sole witness to a gruesome attack – a sensitive artist living on a narrowboat – is rendered mute by the horror of the event and can’t speak to anyone. Assigned by The Met to help, Sam uses art therapy an in attempt to coax details of the killer from him. She’s been given only seven days by the police, but as time runs out another murder is committed. Drawing on all her guile and quick-thinking, Sam gradually puts the enigmatic clues to the killer together, but in doing so she exposes herself to grave danger.

Why did you create Dr Samantha Willerby?
I love reading psychological thrillers and as a former psychotherapist myself, I know how fascinating and intriguing that world can be! I wanted a character who could show readers an aspect of psychology that’s usually kept behind closed doors, so they could be a fly on the wall and observe what really goes on when someone goes to see a ‘shrink’. I didn’t want to create a traditional police or private detective, so Sam is a different kind of ‘sleuth’. Having a lead character with a range of unusual skills gives her a unique edge: Sam is able to read body-language, she can often tell when people are faking it, she listens intently and notices details. Writing about a psychologist opens up a huge range of plot possibilities. I love secrets, lies, hidden vices, hidden motives and moral dilemmas. It’s great having the scope to explore all these themes in my novels!

What about Sam’s personal life?
Sam isn’t married, largely because she’s been too focused on her career, but she also has a dreadful history of choosing the wrong men. She lives in a rundown flat in Clapham, always thinking about moving somewhere more upmarket, but never getting around to it. Sam’s own sister has schizophrenia and is the reason Sam trained in psychology in the first place. Miranda is two years older; she’s flighty, erratic and often irresponsible, but Sam adores her. Their history is turbulent due to misunderstandings about Miranda’s diagnosis and she’s wary of Sam, who only wants to help and support her sister, but who is often accused of interfering. Their stormy relationship is an ongoing theme in the books.

How does Dr Sam develop through the novels?
Sam Willerby is always keen to learn and add new areas of training, which shift her into fresh terrain in terms of her patients. In Perfect Bones, she puts to use new skills in art therapy; sketches, paintings and a sand-tray. These are techniques I was familiar with in my own therapy work, particularly useful for dealing with trauma. The sand-tray involves a layer of sand four inches deep and a collection of random items that patients use to ‘show’ symbolically how they feel. With tiny models: figures of Batman, Peter Pan, Darth Vader, Cinderella, animals, shells, stones, items from a dolls’ house including a grandfather clock – it’s a cornucopia for the imagination!  And it is the first way in which the witness communicates with Sam.

What do you like most about your lead character?
Sam is really good at her job and is always striving to help people in distress. People expect her to stay calm and professional in all situations and she can often appear detached, but inside she’s bubbling over with emotions, struggling with fraught decisions and quandaries. I feel for her, because she’s vulnerable and scared (just like anyone else), but she feels she has to hide it and be strong. She’ll put on a brave face and always go the extra mile for people.

What do you like least about her?
The truth is Sam often feels lost, lonely and desperate to find love and happiness. Because she pretends to be fine, she never asks for help, so at times she can appear arrogant or cold. Only on rare occasions does she allow her polished front to slip. She can also be naïve…

Does she share any similarities with you?!
Yes! I think most people would think I’m pretty together and organised, but most of the time I don’t feel like that under the surface! Like Sam, I’m keen to learn and push myself and I’m very disciplined. Sam is much tougher than me, though. She’s more feisty and really good in a crisis, – I’m not sure I would be! She digs beneath the surface and ends up unearthing all kinds of horrors and I’m sure I’d have hurried away back to my bolthole long before then! 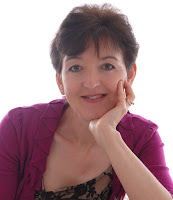 AJ Waines is a number one bestselling author, topping the entire UK and Australian Kindle Charts in two consecutive years, with Girl on a Train. Following fifteen years as a psychotherapist, the author has sold nearly half a million copies of her books, with publishing deals in UK, France, Germany, Norway, Hungary and Canada (audio books).

Her fourth psychological thriller, No Longer Safe, sold over 30,000 copies in the first month, in thirteen countries. AJ Waines has been featured in The Wall Street Journal and The Times and has been ranked a Top 10 UK author on Amazon KDP (Kindle Direct Publishing).

She lives in Hampshire, UK, with her husband. Find her books here and visit her website and blog, or join her on Twitter, Facebook or on her Newsletter.