Thank you for stopping by I'm delighted to be one of the stops on the blog tour for Death Comes In Through the Kitchen. Teresa Dovalpage has kindly agreed to take part in a little Q&A today. First of all though let's take a look at the description for the book... 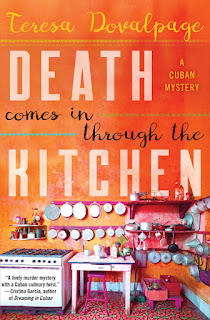 Set in Havana during the Black Spring of 2003, a charming but poison-laced culinary mystery reveals the darker side of the modern Revolution, complete with authentic Cuban recipes.

Havana, Cuba, 2003: Matt, a San Diego journalist, arrives in Havana to marry his girlfriend, Yarmila, a 24-year-old Cuban woman whom he first met through her food blog. But Yarmi isn’t there to meet him at the airport, and when he hitches a ride to her apartment, he finds her lying dead in the bathtub.

With Yarmi’s murder, lovelorn Matt is immediately embroiled in a Cuban adventure he didn’t bargain for. The police and secret service have him down as their main suspect, and in an effort to clear his name, he must embark on his own investigation into what really happened. The more Matt learns about his erstwhile fiancée, though, the more he realizes he had no idea who she was at all—but did anyone?

Nice. I just return from a trip to the South of France. (Picture included)
Taos, New Mexico, where I lived for ten years.
San Diego, California.

Reading.  I am a bookworm!
Teaching. I am a professor at a local community college.
Working out because I like to eat so I must keep burning calories.

Now this is difficult! I will take my Kindle with me 😊
In Spanish I will take Los Amantes Clandestinos (The Secret Lovers) by Ana Cabrera Vivanco.
In English, Crime and Punishment by Fyodor Dostoevsky and
The Gifted Gabaldon Sisters by Lorraine Lopez.

Cuentos y Estampas (Stories and Images, by various authors).
Treasure Island by Robert Louis Stevenson.
Little Women by ‎Louisa May Alcott (it was the first book I read in English).

Ana Ozores from La Regenta (The Regent’s Wife) by Leopoldo Alas (Clarin).
Raskolnikov from Crime and Punishment.
Ursula from One Hundred Years of Solitude.

Food, mystery novels in general, and a conversation with my mother about my grandma’s recipes. 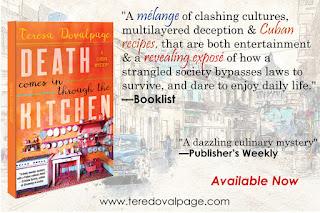 Teresa Dovalpage is a Cuban transplant now firmly rooted in New Mexico.  She was born in Havana and now lives in Hobbs, where she is a Spanish and ESL professor at New Mexico Junior College.
She has published nine novels and three collections of short stories. Her English-language novels are A Girl like Che Guevara (Soho Press, 2004), Habanera, a Portrait of a Cuban Family (Floricanto Press, 2010), and Death Comes in Through the Kitchen (Soho Crime, 2018), a culinary mystery with authentic Cuban recipes.
Her novellas Las Muertas de la West Mesa (The West Mesa Murders, based on a real event), Sisters in Tea/ Hermanas en Té and Death by Smartphone/ Muerte por Smartphone were published in serialized format by Taos News.
In her native Spanish she has authored the novels Muerte de un murciano en La Habana (Death of a Murcian in Havana, Anagrama, 2006, a runner-up for the Herralde Award in Spain), El difunto Fidel (The late Fidel, Renacimiento, 2011, that won the Rincon de la Victoria Award in Spain in 2009), Posesas de La Habana (Haunted ladies of Havana, PurePlay Press, 2004), La Regenta en La Habana (Edebe Group, Spain, 2012),  Orfeo en el Caribe (Atmósfera Literaria, Spain, 2013), and El retorno de la expatriada (The Expat’s Return, Egales, Spain, 2014).

You can check out all the stops on the tour, see below... 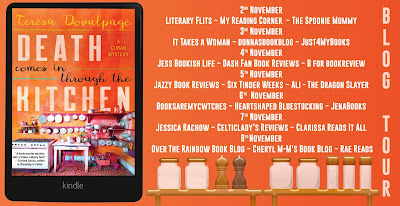