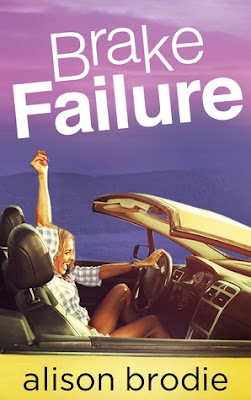 “Is it too late to tell him you love him when you are looking down the barrel of his gun?”An English debutante transforms from Miss-Perfectly-Correct to criminally insane as she breaks the bonds of her rigid upbringing. Sheriff Hank Gephart tries to reel her in - but she’s out of control and she’s not hitting the brakes.What happened to the genteel lady in twin-set and pearls? And why did she shoot Mr Right?Brake Failure is set in 1999 in the months leading up to Y2K “meltdown” when the US government was spending $150 billion preparing for Armageddon As Lionel Shriver says in her novel, We Have To Talk About Kevin: "1999, a year widely mooted beforehand as the end of the world."

I had so much fun reading Brake Failure everything about it captured my attention and held it all the way through. Ruby is a complex character who goes on a pretty surprising journey to find out who she really is.

Hank is brilliant with Ruby, I loved their feisty clashes and sizzling chemistry. Ruby isnt always a 100% likeable but I think this works in her characters favour. I always find characters like Ruby more endearing and believable. Even if at times I want to shake some sense into them.

There are a myriad of supporting characters but they all equally bring something to the story. I especially loved Molly and her friendship with Ruby. A special mention has to go to Rowdy, he was great!

A bit of everything goes into this story and I found it so difficult to put down. I ended up finishing it really late one night as I had to know how it would all end. The plot moves brilliantly with a few surprises along the way. It was intriguing to start the book in the present (well the Y2K) and then work back to show the reader what actually happened. I really enjoyed the way this worked and how we get snippets of information as to how Ruby got herself into such a pickle!

Thank you so much to Alison Brodie for my copy. This is my honest and unbiased opinion.
at December 28, 2016