Clash Of Worlds by Philip McClennan

James has no memory of his parents, he has always wondered who he is and where he came from. He arrived with another boy called Chad, they can both do phenomenal things.

They each have amazing abilities but as they grow up Chad becomes more unstable and reckless. Will James and Chad find out where they came from and also stop the man in white who is determined to destroy them both? 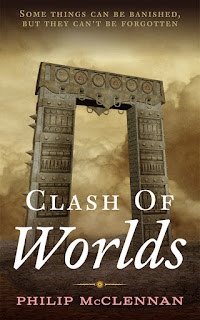 The start of the book sets the scene well, it is really descriptive and I was drawn into the story. I think I enjoyed this book because I hadn't read any fantasy stories in a while. So it made a refreshing change to enjoy the escapism. Even though it is a fantasy there are lots of other elements that go into this book.

The characters were developed well and I felt like I was a part of their lives. I think it helped that even though they have a few similar powers they are completely different in their personalities. I liked how the reader followed both worlds it was intriguing to see this and to see how everything played out. I especially liked the character Kara and I enjoyed following her journey in the book.

I found that I enjoyed this book there was a good progression to the plot. Something was always happening and the action kept up throughout. The characters were interesting and I wanted to find out more about them. If you like fantasy I would definitely recommend but even if it's not your usual genre it may be worth giving it a try too!