Rae reads... When a Marquis Chooses a Bride by Ella Quinn 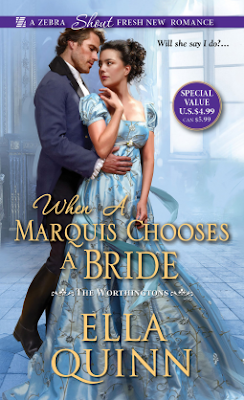 Thanks to their large extended family and unconventional courtship, the Worthingtons have seen their share of scandal and excitement. But nothing has prepared them for this...

The Dowager Lady Worthington isn't quite sure what to make of country-girl Dorothea Stern. As the granddaughter of the Duke of Bristol, Dotty is schooled in the ways and means of the nobility. But her sharp wit and outspoken nature has everyone in a tizzy. Especially their cousin, Dominic, the Marquis of Merton.
Prematurely stuffy, Dom was raised by his cheerless uncle to be wary of a host of things, including innovation, waltzing, and most perilous of all: true love. Still, there's something about Dotty, beyond her beauty, that Dom cannot resist. But the odds are against him if he intends to win her as his bride. Will he choose loyalty to his family—or risk everything for the one woman he believes is his perfect match…

I have to admit it took me a couple of chapters to get into the story. However from then on I began to sit back and enjoy reading this book. The plot moved at a good pace with plenty of romance and a bit of danger. I was definitely entertained as Dotty and Dom tried to get to their happy ending. Will they succeed?

I liked Dotty pretty much from the beginning as she came across so friendly and kind. It was great how Dotty kept rescuing things it made her character all the more endearing.

On the other hand it did take me a while to warm up to Dom, this was however down to his stuffy upbringing. Then as his character developed I got to see his kinder side which made him much more likeable. There was definitely good character development which Dom was a perfect example of.

This is the second book in The Worthington series but can be easily read as a standalone. Although it would be good to also read the story of Grace and Matt in the first book -Three Weeks To Wed.

For an easy going story with a lovely simmering romance then When a Marquis Chooses a Bride is perfect for you!

Thank you to Kensington Books & Netgalley for my copy in exchange for an honest and unbiased opinion.
at August 26, 2016