Despite being the illegitimate daughter of a prince, Gillian Dryden is happily ignorant of all social graces. After growing up wild in Italy, Gillian has been ordered home to England to find a suitable husband. And Charles Valentine Penley, the excessively proper, distractingly handsome Duke of Leverton, has agreed to help transform her from a willful tomboy to a blushing debutante.

Powerful and sophisticated, Charles can make or break reputations with a well-placed word. But his new protégée, with her habit of hunting bandits and punching earls, is a walking scandal. The ton is aghast . . . but Charles is thoroughly intrigued. Tasked with taking the hoyden in hand, he longs to take her in his arms instead.

Can such an outrageous attraction possibly lead to a fairytale ending? 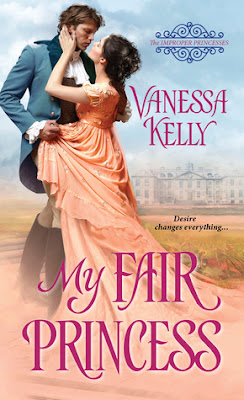 I instantly liked Gillian she was a strong, fiesty and likeable character although she did like to act first and think later. Charles even though to start with was quite straight laced became more laid back as he spent time with Gillian. I liked that they both had a positive effect on each other. The characters were well written and I grew attached to them the more I read.

The story started well and grabbed my attention, I was looking forward to seeing if Charles could help to tame Gillian's personality and how everything would turn out. There was plenty of passion, romance and a little bit of danger. The story kept a good pace and I ended up finishing this book pretty quickly.

My Fair Princess has an engaging story with strong entertaining characters!

Thank you to Kensington Books & Netgalley for my copy in exchange for an honest and unbiased opinion.