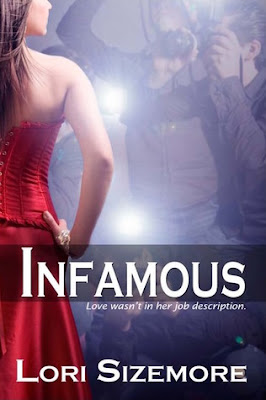 Justine Montgomery, daughter of a divorced beauty queen and TV magnate, is a tabloid disaster after her infamous sex tape. She’s so desperate to help save her family’s home she turns to her deal-making dad. Can she prove to him she’s cut out for a career in television or will she lose it all?Sawyer has his own past and a successful career is his only goal. Seeing Justine fail would mean the promotion of a lifetime, but things get complicated when he develops feelings for her. Suddenly, the lines between work, life, sex, and love are blurry.They will have to overcome the bitterness of a rejected ex, the controlling actions of her father, and the half-truths they’re telling one another to forge a lasting partnership both on the job and off the clock.

When I read the description for Infamous by Lori Sizemore I was definitely interested. It sounded like the perfect book to curl up with and be entertained. So what did I think...

Justine is a strong and likeable character and I thought that with Sawyer they made a great team. Their interactions were fiery and fun and I really enjoyed reading the story from both of their points of view. Justine grows as a character and becomes more responsible as she tries to prove to her father that she can stick at something. Sawyer is pretty great as the love interest and both characters have pasts that aren't perfect. Travis has to have a special mention as the ex who was to put it blunt a little on the creepy side.

The plot moved at a good pace and once I started reading I found it hard to put the book down. It was great to see Sawyer and Justine working to put the TV show together slowly getting to know each other. Will Justine and Sawyer make their show a success and will there be a happy ever after for them?

This fun and enjoyable book kept my attention while Justine and Sawyer entertained me with their will they won't they relationship.

Thank you to Lori Sizemore for my copy, this is my honest and unbiased opinion.