Review - Girl on a Plane by Cassandra O'Leary 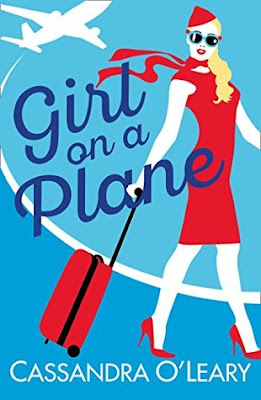 When feisty Irish flight attendant Sinead Kennealy locks eyes with sexy Australian CEO Gabriel Anderson in First Class, sparks fly. But as they jet across the globe from Melbourne to London, it’s clear that they’re in for a turbulent journey . . .
Stressed-out Gabriel doesn’t do relationships. And Sinead isn’t about to be fooled by another bad boy after escaping her stalker ex. Then a storm hits, causing the plane to land unexpectedly, and Sinead and Gabriel are thrown together in Singapore.
The pressure rises as Sinead’s unhappy past threatens to catch up with her. But might Gabriel be the one to heal her heartbreak? If he could open up about his troubling secrets, maybe a relationship could actually get off the ground. Fasten your seatbelts – this WON’T be a smooth ride . . .
Buy here
====================
My Review

I love to travel so as soon as I read the description I was pretty certain I would find Girl on a Plane enjoyable. I've been lucky enough to travel to Australia a couple of times and the last time I went I visited Melbourne. I had such a lovely time there so it was great to read the parts of the book set there.
The connection that Sinead and Gabriel share is pretty special and the chemistry between them is explosive. Gabriel is a great love interest and his character has depth that makes him even more appealing. Sinead is a strong character and even though she had a bad experience in her past she is still willing to give love a try. Could Gabriel be the one?
The story moves along at a great pace especially as you get to know both characters and you find out that their lives are far from simple and straightforward. Cassandra O'Leary has written a romance that captured my attention and has created some brilliant characters.

I also have to mention Ryan and Charlotte, they made such a great team and I loved that they were a part of Sinead and Gabriel's story.