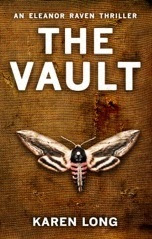 VAULT: A large room or chamber used for storage of valuables, especially an underground one…

In the unrelenting heat of the Toronto summer, a fire at a land-fill site uncovers the remains of a local prostitute. But the post-mortem reveals disturbing details – the body has been preserved and is not who or what it seems.

DI Eleanor Raven is back on duty six months after barely surviving being kidnapped and tortured by a depraved serial killer. Work is her sanctuary but she’s carrying deep scars – mental as well as physical. Where do you go when the place you feel safest is also the place where you are most at risk?

As Eleanor battles her own demons, it looks as though a killer in the city is making a gruesome human collection. And Eleanor’s fight to save the last victim of the Collector becomes a battle to save herself.

The Vault is the second book in the Eleanor Raven series and just like the first book the events that take place make sure the story hits the ground running. This book has a great premise and I was hooked by the story straight away I was also interested to see how Eleanor was holding up after the events of the first book. I think that because I had already been introduced to Eleanor's character it was very easy to get straight into the story as you kind of already knew her ways of solving a case. She is still flawed and maybe even a little bit more damaged after the events of book 1. I will leave it there - no spoilers from me! Again I found Laurence to be a great character and it was good to see a little bit of his past revealed along with Eleanor's. Eleanor and Laurence make a great team in fact all of their colleagues bring something to the story.

I loved that the story was pretty creepy and definitely had a certain unsettling feeling to it. Once again there is an interesting and unnerving killer on the loose with the team trying to pick up on the clues to catch the killer. With plenty of tension to keep the plot moving along nicely I read this book even quicker than the first book. Fast paced with a dark and disturbing killer I didn't want to put this book down. The ending had me sitting up in bed wide awake wondering how everything would turn out.

The Eleanor Raven series just gets better and better!

Thank you to Karen Long & Brook Cottage Books for my copy. This is my honest and unbiased opinion.

The Safe Word by Karen Long