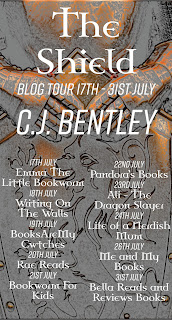 Thank you for joining me today I have a great guest post where C.J. Bentley talks about her book The Shield. 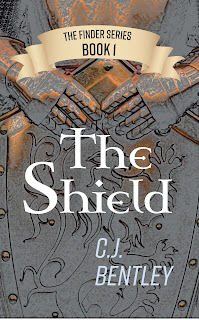 People lose their belongings. That is a fact of life. It can happen by accident, but sometimes it can happen when you put them in a very safe place and forget where that safe place is. Not many people are good at finding them again.

A young, gutsy girl with a kind heart, who’s searching for her own identity growing up in the 1960s, just happens to be very good at finding things. Can she be the one to help return whatever is lost – anywhere and at any time - to its original owner?


With the help of a beautiful yet mysterious wise woman and a chivalrous knight she does just that. She finds and returns his shield, lost in battle, which unbeknown to her holds a secret that is important to his King, the safety of the Kingdom and the life of the daughter of his best friend.
The Shield is the first story in The Finder Series, taking our heroine on extraordinary journeys back in time. Her first adventure takes place in Medieval England in 1340 where she meets King Edward III, his wife Philippa and their son, who will later become the Black Prince.

The Finder Series – Book 1 ‘The Shield’

Basically each book in the ‘Finder Series’ follows the same format.  An item is lost, when and where it is lost and by whom is all revealed in the Prologue.

In the first book,’ The Shield’, a shield is lost in battle by a knight, Sir Kay, during the reign of King Edward the third in Medieval England in 1340AD, a little historical information about this time is given at the back of the book.  The majority of the book is set in York, again information at the back for those who have never been lucky enough to visit York, a very beautiful and historical city in North Yorkshire.

The main protagonist in each book starts in the first book as a ten year old girl growing up and trying to find her own identity during the nineteen sixties.  She is a gutsy girl with a kind heart and a quick mind, she doesn’t hesitate to help people, it’s the way she has been raised by her parents who don’t mind that she changes her name almost weekly to suit which book she is reading, or which television programme is her favourite.   They love her and support her unusual habit of name changing, they treat it as something she needs to do and respect her for it, (apart from the older sister in her family who just thinks it is weird).

She is told by another main character, the beautiful and mysterious wise woman she has a destiny to fulfil.  As a ten year old girl she is not altogether sure what a destiny is, and is not convinced she wants one to fulfil, but she does like to help people and therefore finds herself in situations during different times of history with people she is there to help.  The wise woman features in all of the books in the ‘Finder Series’.  She is responsible for the girl’s travelling back through time and openly admits they will meet many times, (not sure how many books it will take to fulfil the girl’s destiny, I am currently writing book four, ‘The Ring’ where she finds a ring belonging to an Arabian princess and where she is taken back to the Middle East and travels with Ibn Batutta, who was a lesser known adventurer and intellect who travelled even more extensively than his better known adversary Marco Polo).

With the backdrop of the swinging sixties, with experiences of school, favourite subjects, teachers, music and important issues of that time, the main character is evolving as a person along with her friends in ‘the gang’.  Their characters are all very different but they do share the same loyal values.  The freedom they have as children growing up in a time when they could take a picnic and play out of doors all day, having to be back in time for supper with the family, something unavailable for some children growing up in cities, in this relatively new century.  They bike ride, swim, build dens, tree swings and even make fires, all outside from dawn until bedtime, usually nine thirty during the long summer holidays.  As they grow throughout each book they support each other in different ways and their changing characters are explored as they mature.  The main protagonist ‘finds’ life skills during each time she visits.  In ‘The Shield’ she discovers she can speak French, the English court at that time spoke French as the King owned lands in France and a lot of his time was spent there.  She also finds an ability to ride horses, something she couldn’t do in the sixties.  Her interest in History grows as she does, her aspiration to become an Archaeologist is something which remains with her as she attends school each year and I hope she attains her dream. (It is something I will have to wait to find out as I progress with writing each book).

Certain historical facts researched form the background for this story and certain facts just fell into place.  Edward the third and Queen Philippa were married at York Minster in 1328 and their son Prince Edward was born at the English Court in Woodstock, (now the site of Blenheim Palace) in 1330, making him the same age as the girl. The Battle of Sluys where the English Navy were victorious against the French did take place, (it is recorded as being in June of 1340, I slightly bent the time to fit my story to July).

The inspiration for this story came from my finding, whilst fishing in the local stream with a friend, a shield in the silt at the bottom of the beck.  Because of the weight and there being only two of us we chose to put it back.  That experience has remained with me until living in Doha, I had time to spare to write about what might have happened if we had withdrawn it fully from the silt and carried it home.  Later this year having discovered from my sister that the fields from my childhood remain, my family and I are going on a shield hunt!  It would be pretty awesome if we could locate and discover what had inspired me to write this story. 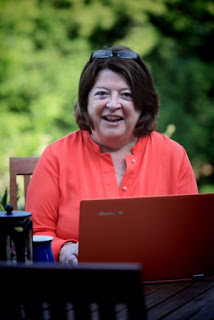 Originally heralding from the North of England, C.J Bentley has travelled extensively and enjoyed living in a variety of countries across the world from Dubai to Doha, Qatar and now the countryside in the South of France. A background in teaching and childcare she has always enjoyed creating adventure short stories. However, it was when she became a grandma and with her grandchildren growing up  that she discovered that books seemed to contain only stories of vampires, zombies and farts that she decided seriously to take matters into her own hands and put pen to paper which today she calls The Finder Series.