I'm delighted to be one of the stops on the blog tour for A Shape on the Air by Julia Ibbotson. Today I will be sharing my review along with an extract. There is also a great giveaway to enter too. First of all let's take a look at the description for the book... 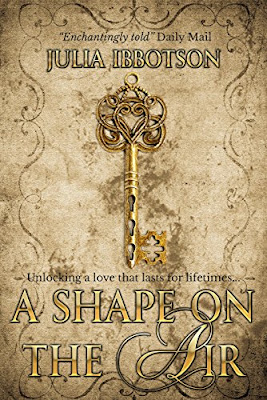 
Two women 1500 years apart. One need: to save the world they know. Can they help each other to achieve their greatest desire? And what if that world they want is not the one that's best for them?

University lecturer in medieval studies, Dr Viv Dulac, is devastated when her partner walks out (and with her best friend too!) and threatens her home.  Drunk and desperate, her world quite literally turns upside down and she finds herself in the body of the fifth century Lady Vivianne, who is struggling with the shifting values of the Dark Ages and her forced betrothal to the brutish Sir Pelleas who is implicated in the death of her parents. Haunted by both Lady Vivianne and by Viv's own parents' death and legacy, can Viv unravel the web of mystery that surrounds and connects their two lives, and bring peace to them both? A haunting story of lives intertwining across the ages, of the triumph of the human spirit and of dreams lost and found.

This story has a wonderful combination of having a mystery that needs solving, a time slip aspect and also an intriguing set of characters from both time periods. Both timelines work well within the story and the transition from one to the other was on the whole easy to understand and felt pretty natural. With the added mystery making a great puzzle that I couldn't wait for it to be solved.

I haven't read many time slip stories however the ones that I have read have all been entertaining and the history aspect to it always makes me appreciate them even more. If you enjoy history especially surrounding this time period I think you will really enjoy the detail that Julia Ibbotson has gone to. I have to admit that whilst I'm fascinated with history I have next to no knowledge of medieval history. So it was actually quite nice to get maybe a hint as to what life was like at the point in our past. If you aren't a massive fan of historical stories than you may not find these parts as interesting. However the story is still intriguing and the romance side to it was also a lovely addition.

The story is well thought out and as anyone knows when it comes to time travel it can end up getting pretty confusing. However A Shape on the Air manages this subject easily without making too many complex scenes. The plot runs smoothly and before I knew it I was halfway through and was really enjoying both the story and the characters. There is a good balance of likeable characters along with some downright nasty ones that make you want to root for Viv and Vivianne even more.

A very enjoyable time slip story with added romance and mystery to keep you intrigued!

With thanks to Brook Cottage Books for my copy. This is my honest and unbiased opinion.
EXTRACT

Again, a movement behind her, a parting of the rushes. The sense of a dark figure at her back. She swung round. Nothing. Then she turned back to the mere. A shadow on the water. She stared at the ripples but the image diffused and disappeared. Hardly daring to look she glanced round again. Nobody. She was alone.

Viv shuddered, her eyes fixed on the water in front of her. She must get out of here, get safely home, but somehow she couldn’t move. She was transfixed and held against her will, as if her body was bound with invisible ropes. The mere and the world around her juddered, swept away and then returned, misty and echoing in her head.

She felt herself cry out. But it was a cry, not for help, but of despair.

Then a hand planted firmly on her back, pushing her. She staggered but felt the inexorable push towards the dark murky water. As she fell, she had the odd sensation of someone breathing on her neck, falling with her. Her hand reached out to save herself, to grasp anything that might halt her tumble. She scrabbled wildly at the undergrowth but felt the branches break as she tried to clutch hold of them.

The cold water rose to meet her and there was no longer firm ground beneath her. She flailed about but it was hopeless; the cold stole her breath and her strength. Something was pulling her downwards, sucking her into the murky depths of the mere.

She was sinking, as if there was someone below her who was grasping her ankles and pulling her down. The water covered her head and, even at the last, when she managed to struggle her head above the surface she saw that she was much further away from the bank than she had imagined. She could no longer fight, and with that realisation, the water covered her head for the last time.

*    *    *
A deep male voice came faintly from far away and slowly entered her consciousness.

Viv felt a strong arm grip her waist and then she was floating, being drawn gently through the water. She gasped for breath as she rose, and her mouth filled with balmy air, sweet and fragrant. Oddly, it was light, and the sun was just starting to sink into dusk.

“What …? In heaven’s name …?”  Viv spluttered, as the man lifted her up and over his broad shoulder and, splashing through the shallows, carried her to the bank. The world swirled around her and she found it hard to focus. She tried to draw in her breath but her chest felt too tight. She was trapped against him. Her body felt strange, her dripping sleeves seemed wider than they should be, her jeans somehow flapping against her legs. She was soaked through but yet the mere seemed to be calling her back again. She tried to twist round to it but the man only held her tighter. She grabbed hard at his shoulder and a piece of wet cloth tore away in her hand. It felt strange, not a fabric she was familiar with, thick and closely woven, but not rough.

He lowered her to her feet and grinned down at her. His eyes were dark like smoke, skin olive and exotic, and he ruffled his long dark curly hair to flick away the water that soaked it. She stared at his large wide mouth and the dark shadow that swept his chin and upper lip. His smile was intimate as if they shared a secret. For a moment, Viv felt her brain somersault. Her mind was drifting in and out of consciousness.

She was aware of movement around her and she tore her eyes away from him. There were people, men, their figures moving out of focus behind him, their voices echoing as if from far away. There were trees that she didn’t remember being around the mere. It seemed wilder than it should have been.  Yet everything within a few feet of her was exceptionally bright and clear, the light picking out all detail: the veins on the leaves, the knobbles and crevices of the tree bark starkly sharpened in high relief. Beyond that, all she saw was misty and swirling.

As she clenched her hands into fists she realised that she still held the torn fragment of cloth, and made to thrust it into the pocket of her jeans. The pocket was no longer there. She looked down and saw that she wore a long skirt, the dark wet fabric clinging to her legs. Good god, what was happening?

Viv looked back at the tall figure before her. He was dressed in some kind of loose cream tunic, dripping with lake water, with a brown leather belt that was finely tooled in gold, and as she stared he pulled on his boots that he had left at the water’s edge.

She looked wildly around her. The other men were dressed likewise in tunics, though not so fine.  There were horses higher up on the bank-top; she could hear their loud snorting and feel the juddering of the earth as they stamped their hooves. What was this?  What was going on? Her brain didn’t seem to be working properly; she felt confused, dull-witted. The sun was sinking behind the trees, leaving a trail of bloody streaks, red and orange, in the sky. Yet she had stumbled into the lake in the dark. She remembered staggering, a hand on her back, clutching for the branches to halt her fall into the water, floundering, or being pushed? Her clothes … her peculiar-feeling body … these people.

Her hand found a pouch hanging from her waist within the folds of her soaking skirt and she thrust the fabric into it, hiding it, though she had no idea why she needed to.

“Sir Roland,” murmured one of the men, holding out to the dark-eyed man a  large heavily embroidered crimson cloak which her rescuer swept around his shoulders and pinned with a huge gold brooch, covering the torn seam. As he did so, he glanced at Viv and smiled intimately again, his glance insolently drifting down to the clinging folds of her skirt and the pouch where the fragment of cloth nestled. His eyes found hers.  Embarrassed, she turned away. 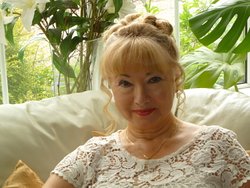 Award winning author Julia Ibbotson lives with her second husband in the heart of England in a renovated Victorian rectory, and, their four children having grown up, she is now suffering from empty nest syndrome. She is obsessed with the medieval world and concepts of time travel (and chocolate) (and cakes …).  She read English at Keele University (after a turbulent but exciting gap year in Ghana) specialising in medieval studies. She wrote her first novel at 10 years of age, but life (and later the need to earn a living as a single mother) intruded and she became a school teacher, and then, on gaining her PhD as a (very) mature student, a university lecturer. Julia has written a memoir The Old Rectory: escape to a Country Kitchen (with recipes) and a children’s book S.C.A.R.S (a fantasy medieval time slip), before embarking on her Drumbeats trilogy (which begins in Ghana).  Her latest novel, A Shape on the Air, is a historical (medieval) time slip romance. Clearly, she is obsessed …  Apart from insatiable reading, she loves travelling the world, singing in choirs, swimming, yoga, baking, and walking in the English countryside.