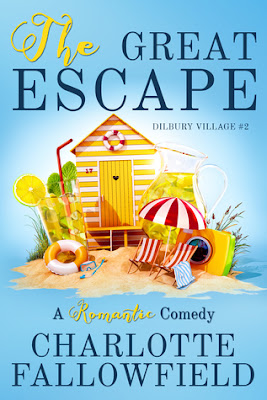 A tropical beach paradise in Mexico was the last place Georgie Basset expected her decimated heart to be jump-started again, not after she’d been jilted the year before by her fiancé, leading to said breakage. But when she spotted Weston Argent jogging along the beach, all bronzed with ripped muscles like some Greek God out of a modern day Baywatch scene, she nearly choked on her cocktail. She knew immediately she was in trouble, she’d never reacted so strongly to a man on first glance.

However, after a disastrous first date with him, she headed back home to Dilbury, resigned to never seeing him again. That is, until Weston turned up unexpectedly at her dog grooming parlour with Bertie the French bulldog, a species she had a real weakness for. She couldn’t help but wonder if fate was playing a helping hand. But each time she saw him, their encounters never went smoothly, resulting in some mortifying and hilarious escapades. Despite their undeniable attraction, there was something about Weston that she couldn’t quite put her finger on, something that concerned her.

When the truth finally came to light, Georgie was convinced that all men were dogs, except she knew that was an insult to dogkind. Ever the meddler, her best friend, Abbie, intervened, knowing in her heart that despite what had happened, Weston was full of good intentions, and was undoubtedly Georgie’s Prince Charming.

The question remained, could he convince Georgie of that, or would he forever remain in the dog house?

While The Great Escape is a standalone story, it's the second in the Dilbury Village series of romantic comedy novels. All of them will be set in the quaint fictitious English hamlet in the Shropshire countryside, but feature a different village couples' story.

Warning, if you are of a sensitive disposition when it comes to toilet humour, then the Dilbury Village series may not be for you!

The Great Escape is the second book in the Dilbury Village series but it could easily be classed as a standalone. However just so you don't miss out on Abbie's story it really is worth reading Never the Bride. It is guaranteed to make you smile and laugh the whole way through.

I have to say that I love Georgie and Abbie's friendship it was one of the things I loved most about Never the Bride. Charlotte Fallowfield has written a fun, down to earth and lovely connection between the two. I love Abbie and it was wonderful to see her character again she is hysterical and really does manage to get herself in some embarrassing situations. I was pretty much stuck in the middle between cringing but also giggling away to myself at numerous points in this book. However in this story Georgie also gives Abbie a run for her money with some of her cringe worthy escapades. My only advice for reading this story is avoid drinking and eating unless you want to be covered in whatever you are holding. Slightly embarrassing but the occasional snort did escape but it really is the perfect pick me up if you are having a bad day.

The first meeting between Georgie and Weston is excruciatingly embarrassing for Georgie but it also shows her vulnerable side too. There is a gorgeous chemistry between the pair and I couldn't help but hope everything would work out okay in the end. There is romance, drama and quite a few giggles along the way that make this story highly entertaining. I can't wait to visit the fabulous village of Dilbury again and catch up with these brilliant characters.

A complete giggle fest but with a lovely heart warming feel!

With thanks to Charlotte Fallowfield for my copy. This is my honest and unbiased opinion.