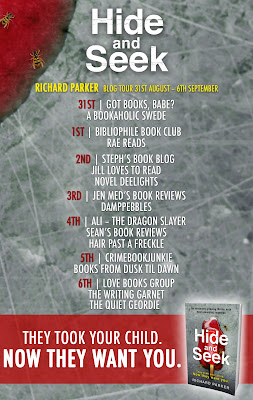 I'm delighted to be one of the stops on the blog tour for Hide and Seek by Richard Parker. Today you can catch my review but first of all let's take a look at the description for the book... 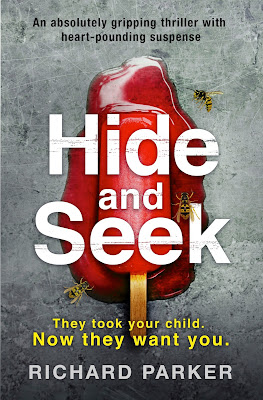 The sun is out. Your little boy is smiling. The next time you look… he’s gone.

When Lana and Todd win a trip to Blue Crest Adventure Park, their four-year-old Cooper is ecstatic, but when Lana goes to meet them, Todd is out cold, and Cooper is missing.

No one stopped the man carrying the sleeping boy. The cameras don’t show where he went. Then Lana receives an anonymous message, telling her to visit a local school with a horrifying history...
This is no random attack. Whoever took Cooper is playing a twisted game, and if Lana wants to find him, she must participate.

What is the link between the school and her missing son? Can Lana uncover the kidnapper’s identity and save Cooper before it’s too late?

A dark, heart-in-mouth thriller that will keep you reading long into the night. Fans of James Patterson, Karin Slaughter, and Tess Gerritsen will be absolutely hooked.

The prologue is guaranteed to get your heart going especially if you are a parent, I just kept thinking afterward what would I do in that situation. It's a scary thought that on a normal average day something bad like that could happen. This story plays on our fears perfectly and on lots of occasions left me feeling on edge as if I could feel the characters fears jumping out of the page at me.

It has some pretty tense moments along with a few shocks and surprises along the way which kept the story moving in a pretty fast paced way for a good portion of the book. I don't want to give anything away regarding the plot but the direction of the story does alter. When this happens it slightly loses a little of the tension that had been brewing and flowing within the story. However the change of pace at least gave me chance to catch my breath and think about everything that had happened. I actually enjoyed how it almost changed into a cat and mouse game that made things very interesting. I couldn't wait to see how things would play out once this happened.

The story will have you constantly asking questions such as why is this happening or who is behind it. The questions that have frustrated Lana and Todd for a while right from when their nightmare situation began. To start with I tried guessing what would happen next but I just couldn't predict anything so I stopped trying and got swept away on this thrilling ride of a story.

Hide and Seek has thrills, shocks and a very intriguing story! 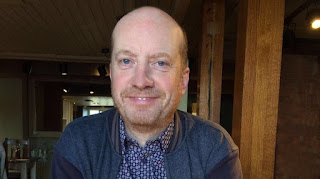 HIDE AND SEEK is his fifth book and is published August 2017.

FOLLOW YOU was his fourth psychological thriller. Reviewers are saying it's Bookouture's darkest crime novel to date.

STALK ME was his third and rode high in the UK and US charts.

SCARE ME was his second. Hollywood movie rights have been acquired by major US studio, Relativity Media. Star of PRISON BREAK and screenwriter of dark horror thriller STOKER, Wentworth Miller, has written the big screen adaptation.