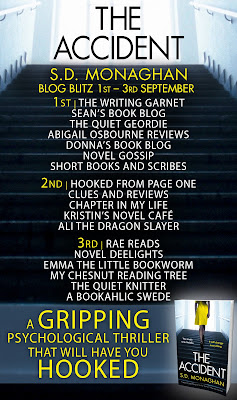 Thank you for joining me today I'm delighted to be taking part in the blog blitz for The Accident by S.D. Monaghan and sharing my review. First of all let's take a look at the description for the book... 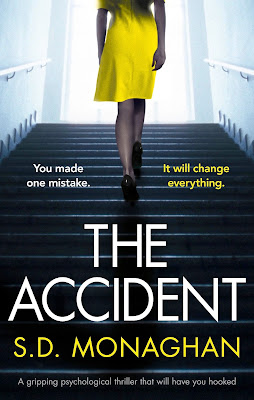 One mistake could change your life forever.

Tara has it all. Married and about to move into her dream home, she can’t explain why she is tempted by one last fling with her ex before she settles down.

David would do anything for Tara. So when he finds her with another man, his world starts to crumble around him.

Ryan isn’t prepared for the punch David throws at him. Stumbling, he slips over the balcony and falls three storeys to the patio below.


How far would you go to save everything you have?

The opening to this story is intense and sets the whole story up brilliantly making me wonder which way things would go. Events quickly spiral way out of control and I was soon on this thrilling journey as David tries to come to terms with the accident. Actions most certainly have consequences as David shockingly finds out. The Accident has a few different elements that all worked well together. There were betrayals, lies and a great tense storyline that pulled me into Tara and David's life.

The characters are complex and have flaws and at times I found it difficult to put myself in their shoes especially Tara. However I don't think the reader is necessarily supposed to be fully sympathetic to the characters. It makes them more human and people can have darker sides to their personalities especially when put in certain situations. As the story went on and the characters developed I did find myself hoping that their would be a way out of their situation. I thought that showing the reader the flashbacks of Tara and David's backgrounds and how they met helped to show some of the reasoning behind their actions.

There are a couple of neat twists that made this story all the more entertaining. It helped that I was caught up in the characters complex lives with a smoothly paced plot that kept me engaged throughout. If you like a slightly more character driven storyline this could be perfect for you. 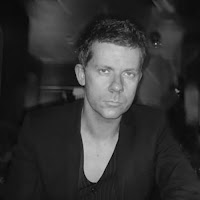 S. D. Monaghan grew up in Dublin before travelling extensively in Asia, Europe and America. After teaching English in Thailand for two years, he moved back to Ireland and gained an honours
degree in psychology. While living in Canada for four years, he studied screenwriting in Toronto. S. D. Monaghan completed the Masters in Creative Writing at Trinity College, Dublin with the editorial guidance of the Pulitzer Prize winner Richard Ford and Orange Prize nominee, Deirdre Madden. On the strength of his work there, he was chosen to represent both the university and the Oscar Wilde Writers’Centre to read excerpts at the Dublin Publishers Festival and on Dublin Culture Night.  He lives in Dublin with his wife, where he is currently working on his new novel. He is represented by Zoe Ross at United Agents.