Love on the Rocks by Emily Anne Brandon #Review @emilyabrandon 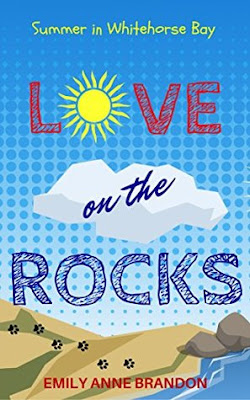 What happens when a Hollywood star unexpectedly rocks up in a sleepy seaside village in Scotland?

Fiery redhead Lexy was left shocked and guilt-ridden by the tragic death of her parents seven years ago. Seven years later she is still struggling to move on, and her only steady relationship is with her one true love – Brian, the border collie.

Clay Gable is weary of the demands of fame and has fled from the Hollywood hills to the tiny Scottish village of Whitehorse Bay – a delightful place he remembers from a wonderful childhood summer many moons ago.

When their paths cross, Lexy helps Clay blend in to village life, while Clay encourages Lexy to leave her unfulfilling job and chase her dream of becoming a bona fide artist.

Meanwhile, Lexy’s ex, Jamie, is acting strangely and appears to have a secret from everyone.

Can Lexy help Jamie deal with his dark secret? And is charismatic Clay Gable the one to bring Lexy’s defences crashing down?

The beginning of the story grabbed my attention and pretty much held all the way through. As we are introduced to Lexy and Tom there are some laughs with their first meeting that made me engage with the story even more.

This story is for the most part fun, light hearted with some pretty great characters. I instantly liked Lexy she has a feisty side that was pretty entertaining to see. However she also has a sad past that adds extra depth to her character and made me connect with her even more. Lexy's friends were also a good addition and I really enjoyed getting to know them as the story develops. Tom is an interesting character that intrigued me but also annoyed me in equal measure! He is over the top and pretty annoying at times but very entertaining even when I wanted to throw something at him.

I loved Jamie and I couldn't wait to find out his story along with what went wrong in his relationship with Lexy. I think I may have slightly fallen for him myself he could be pretty brooding and gruff at times but there was also a sensitive side that was just below the surface. The location of the story sounded perfect and added an extra special touch to this heart warming story. I ended up finishing this book really quickly and it was quite sad to say goodbye to both the story and characters.

Love on the Rocks is a fun romance but has depth with themes of grief, guilt and secrets.

With thanks to Emily Anne Brandon for my copy. This is my honest and unbiased opinion.