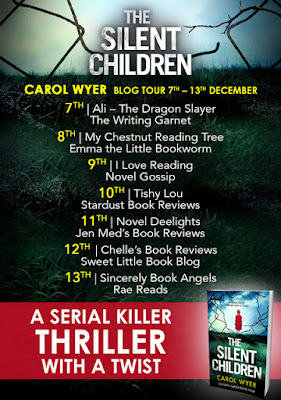 Thank you for stopping by I'm delighted to be one of the stops on the blog tour for The Silent Children by Carol Wyer. Before you read my review let's take a look at the description for the book... 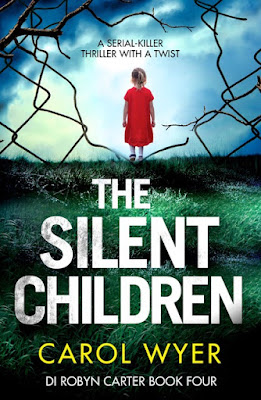 The boy studied the bruise turning yellow at the base of his neck. With quick fingers his mother tightened his tie, and pulled his collar high above it. Her eyes alone said, We will not speak of this...

Years later, a man is found shot dead in a local park. On his phone is a draft text: I can’t keep this secret any longer. The recipient is unnamed.

Detective Robyn Carter knows this secret is the key to the case, but his friends and family don’t offer any clues, and all her team have to go on is a size-ten footprint.

Then a nurse is found in a pool of blood at the bottom of her staircase, and a seemingly insignificant detail in her friend’s statement makes Robyn wonder: are the two bodies connected, and has the killer only just begun?

When another body confirms Robyn’s worst fears, she realises she’s in a race against time to stop the killer before they strike again. But just as she thinks she’s closing in, one of her own team goes missing.

Buried in the past is a terrible injustice. Can Robyn uncover the truth before another life is lost?

An absolutely heart-stopping and compelling serial killer thriller that will keep you up all night. Perfect for fans of Karin Slaughter, Rachel Abbott and Robert Dugoni.

Even though we are now on book four of the DI Robyn Carter series it still manages to feel fresh and new along with having the ability to keep surprising me. This series just keeps getting better and better and this is down to Carol Wyer's writing and of course the character of Robyn. She is a determined person whether it is work related or personal. It's not just Robyn that works so well in this story but her colleagues add so much too. They work well as a team and together with Robyn they share a great dynamic.

There is a steady pace throughout as the investigation comes together with information slowly but surely revealed to the reader but also keeping some back to provide a wonderful tension. This is guaranteed to have you turning the pages especially as this very tangled web of secrets and lies begins to emerge.

As usual I will never make a great detective but this story kept me guessing and it really was like one big puzzle just waiting for that last piece to fall in to place. The premise was so intriguing with an intricate and well thought out plot with lots of suspects to keep things very interesting.

I read this book in two sittings and the last couple of chapters flew by with me desperate to discover the truth. Then comes the ending and all I can say is that I seriously need to read the next book. I was left nearly shouting out loud "no, don't stop there!"

If you haven't picked this series up yet then you really are missing out. It's not just the brilliantly clever murder investigations that will keep you intrigued there is also a fantastic personal story running throughout that will make you even more invested in this set of books.

Five stars!
With thanks to Kim at Bookouture for my copy. This is my honest and unbiased opinion. 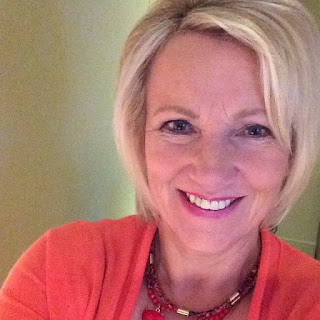 Carol E. Wyer is an award-winning author whose humorous books take a light-hearted look at getting older and encourage others to age disgracefully. More recently she has chosen to write for the "dark side" and embarked on a series of thrillers, starting with the gripping best-seller, Little Girl Lost.


Carol has been interviewed on numerous radio shows discussing 'Irritable Male Syndrome' and 'Ageing Disgracefully' and on BBC Breakfast television. She has had articles published in national magazines 'Woman's Weekly' featured in 'Take A Break', 'Choice', 'Yours' and 'Woman's Own' magazines and writes regularly for The Huffington Post.

Carol is a signed author with Bookouture and Delancey Press.


To learn more about Carol, go to www.carolwyer.co.uk or follow Carol on Twitter: @carolewyer.
Carol blogs at www.facing50withhumour.com and www.grumpyoldmenopause.com
at December 13, 2017