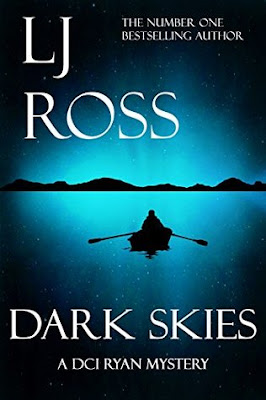 Beware what lies beneath…

One fateful, starry night, three friends embark on a secret camping trip but only two return home. Thirty years later, the body of a teenage boy rises from the depths of England’s biggest reservoir and threatens to expose a killer who has lain dormant…until now.

Detective Chief Inspector Ryan returns from honeymoon to face danger from all sides. In the depths of Kielder Forest, a murderer has escaped justice before and will do anything to protect the secrets of the past. Meanwhile, back at Northumbria CID, an old foe has taken the helm as Superintendent and is determined to destroy Ryan at any cost.

Who will prevail in Ryan’s most dangerous case yet?

Murder and mystery are peppered with romance and humour in this fast-paced crime whodunit set amidst the spectacular Northumbrian landscape.

“L J Ross is the Queen of Kindle” – Sunday Telegraph

As soon as I finished Cragside I was eager to start reading the next book by L J Ross. Even though it is only the second book that I have read in this series I feel as if I have known Ryan and the rest of the team for so much longer. This set of characters are brilliant and even though there is a very turbulent time in their working life there is still plenty of banter and a lovely sense of friendship within this team. Although there were a few times when I was shouting "no don't do it" at some of the situations that cropped up in this story. It really is a great contrast to have the loveable characters then to the ones who you despise!

I have always found cold cases intriguing especially as the killer will have carried on with their life without facing the repercussions of their actions. So I loved the fact that this book revolved around a cold case and all the complications that come with it. As usual I will never make a great detective but I still enjoyed trying to put the pieces together. I was kept guessing throughout especially as there are a number of suspects to choose from.

L J Ross has a fantastic way of setting the scene with descriptions that easily puts the reader right in the middle of the investigation. Whether it's setting the scene and bringing the area of Kielder Forest to life or to the characters who will have you rooting for them. I was completely wrapped up in the entire story and I was reluctant to put it down other than to sleep.

With thanks to Louise for my copy. This is my honest and unbiased opinion.