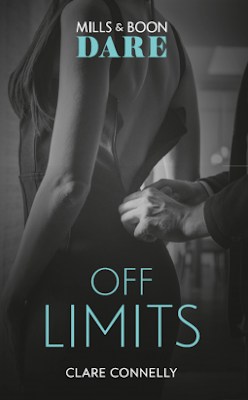 With chemistry this hot, it’s worth getting burned…
Billionaire Jack Grant is totally off-limits to Gemma Picton. He’s wild, deliciously dangerous…and her boss. When working late turns X-rated, it’s better than her wildest imaginings—and Gemma’s imagined a lot! But Jack has major emotional baggage, so when she starts wanting to heal his heart as well as enjoy his body she knows she’s in big trouble…

The chemistry in this book nearly set my Kindle on fire as Gemma and Jack are pretty explosive together. However I really liked the fact that there was also an emotional connection that was simmering just under the surface too. Jack is a complicated character who reveals more depth as the story moves along. He has a tragic past but the question is will he be able to overcome his sadness? I enjoyed the parts where you got to see how Jack was feeling and see the story from his side too. Gemma is likeable and her struggle to stay emotionally and physically distant from Jack is interesting to see play out. She is determined and capable which is exactly what she needs to be especially working so closely with Jack for all that time.

Off Limits is a well paced story that I finished in no time at all so perfect for a lazy afternoon or evening. There are quite a few steamy moments but I would say overall the book is balanced out with a more meaningful storyline too especially the more you get into the story.

Sparks will definitely fly when you pick up this book, Off Limits is both passionate and daring!

With thanks to Mills and Boon & Netgalley for my copy. This is my honest and unbiased opinion.

Clare Connelly grew up in a small country town in Australia. Surrounded by rainforests, and rickety old timber houses, magic was thick in the air, and stories and storytelling were a huge part of her childhood.

From early on in life, Clare realised her favourite books were romance stories, and read voraciously. Anything from Jane Austen to Georgette Heyer, to Mills & Boon and (more recently) the 50 Shades trilogy, Clare is a romance devotee.

She first turned her hand to penning a novel at fifteen (if memory serves, it was something about a glamorous fashion model who fell foul of a high-end designer. Sparks flew, clothes flew faster, and love was born.)

Long-held wishes for publication led to the release of her first book (but certainly not her first manuscript) THE ITALIAN BILLIONAIRE'S BETRAYAL in May 2014. Clare had very modest aspirations, so to have it selling and selling well from the first day it launched wildly exceeded any expectations. Since then, she's had multiple best-sellers on the Amazon charts and has seen more than half a million digital purchases.

​In 2016, Clare Connelly accepted a multi-book deal with Harlequin Presents and now fulfils a life-long dream by writing romance that sets your soul on fire for the brand that the world trusts with its heart.  Clare also writes for the about-to-be-released super-sexy Harlequin Dare line.
If writing had not panned out for Clare she would be pursuing her second-greatest-career love: Food. Having grown up working in fantastic kitchens and read cook books as though they were novels all her life, and run cooking blogs and worked with one of the doyennes of Australian cookery, Clare still indulges her passion for French cuisine whenever she is able. Unfortunately, this passion is at absolute odds with her type 1 diabetes and requires reigning in from time to time. Ditto a penchant for earthy Barossa Valley shiraz.

Clare met her own real life hero at the tender age of seventeen. After travelling and living together for ten years, they were married in a fairytale ceremony amongst friends, family, birdlife, piskies, nephews, wisps of clouds and mountain magic. Clare has a small family and a bungalow near the sea in South Australia. When she isn't chasing after energetic little children, or wiping fingerprints off furniture, she's writing, thinking about writing, or wishing she were writing.