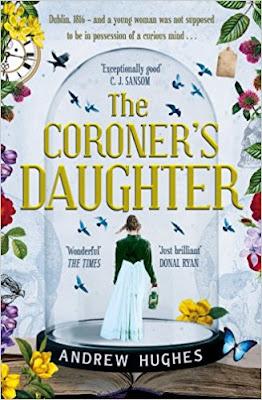 1816 was the year without a summer. A rare climatic event has brought frost to July, and a lingering fog casts a pall over a Dublin stirred by zealotry and civil unrest, torn between evangelical and rationalist dogma.
Amid the disquiet, a young nursemaid in a pious household conceals a pregnancy and then murders her newborn. Rumours swirl about the identity of the child’s father, but before an inquest can be held, the maid is found dead. When Abigail Lawless, the eighteen-year-old daughter of Dublin's coroner, by chance discovers a message from the maid’s seducer, she is drawn into a world of hidden meanings and deceit.
An only child, Abigail has been raised amid the books and instruments of her father’s grim profession. Pushing against the restrictions society places on a girl her age, she pursues an increasingly dangerous investigation. As she leads us through dissection rooms and dead houses, Gothic churches and elegant ballrooms, a sinister figure watches from the shadows - an individual she believes has already killed twice, and is waiting to kill again...
Determined, resourceful and intuitive, Abigail Lawless emerges as a memorable young sleuth operating at the dawn of forensic science.

It didn't take long at all for me to become attached to Abigail's character I couldn't help but admire her determination to discover the truth. Even if at times she managed to get herself into some pretty tricky situations. Especially as a woman of that time wouldn't have been usually doing the things Abby did. Abby is curious, independent and eager to learn which I loved, due to her father's work she has a first hand knowledge of medical and scientific facts. Which is definitely where her curiosity comes from along with making sure the truth will be revealed. The addition of science and medicine to the story was perfect and made the story even more enjoyable for me.

Andrew Hughes has a lovely descriptive writing style that made me feel as if I was right there experiencing everything with the characters. The scene was set perfectly along with giving the reader an interesting mystery to solve and an intriguing religious aspect too. I really enjoyed the friendship between Abby and Ewan it was a lovely addition providing some lighter moments to balance out with the mystery. The story moves at a good pace and kept my interest throughout with clues and secrets being revealed at just the right moment to keep the me invested in discovering the truth.

A wonderful story that just cements my love of historical fiction.

With thanks to Thomas at Transworld for my copy. This is my honest and unbiased opinion.