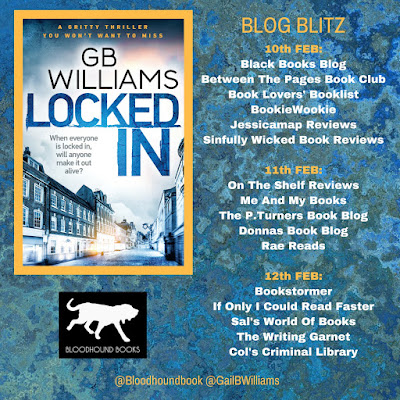 Thank you for stopping by I'm delighted to be sharing my review on the blog blitz for Locked In by GB Williams. First of all though let's take a look at the description for the book... 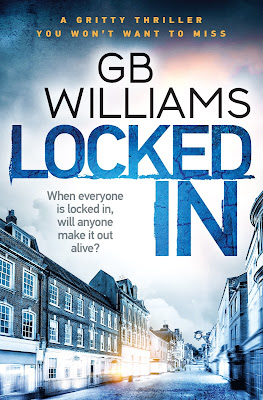 Ariadne Teddington is having a bad day. Then she finds herself staring down the barrel of a gun.

Stuck in a bank robbery turned hostage situation, Ariadne keeps her head down and her mouth shut; because if there is one thing criminals hate more than the police it’s prison guards.

Trapped with a child, a policeman, and a robber on the edge, Ariadne desperately searches for a way out for them.

Can they all escape unharmed?

And when everyone is locked in, will anyone get out alive?

The start of the story easily pulled me in, I couldn't wait to see what would happen next. We all have bad days but for Ariadne this day is going from bad to worse. Ariadne is like a magnet for trouble but she is such a likeable and feisty character.

If you have started the series with this book then I really don't think it would be a problem as events are mentioned from Locked Up which is the first in The Locked Trilogy. However as with all series to get the full picture especially any character history it might be better picking up a copy of book 1 then moving onto this one.

Locked In moves pretty quickly and I did wonder whether the tension would continue throughout. Well I can honestly say that I was kept gripped all the way through with the action taking place in the bank but also showing the reader the police trying to control events.

GB Williams sets the scene perfectly giving the reader tense situations along with a few twists and turns that keep the plot very interesting.

After being made redundant in 2012, GB started taking her life-long passion for writing more seriously and looking to sell her work. Specialising in complex, fast-paced crime novels. Her debut novel, Locked Up, was released in September 2017, Locked In follows in February 2018, and Locked Down in September 2018.

GB was shortlisted for the 2014 CWA Margery Allingham Short Story Competition with the story Last Shakes, now available in Last Cut Casebook. She is also a
feature writer and occasional comic book reviewer. Crime novels are her stock in trade, but she has had success with short stories in various genres
including steampunk, horror, erotica and general fiction.

With bills to pay, she’s back working as a systems architect by day, a freelance fiction editor and keen writer of an evening and weekend. GB really needs to learn to sleep.
Originally from Kent, GB moved to South Wales as a supposed first step on a year around the world.  Then she met a guy.  Kept the guy, kissed the travel goodbye. Knowing that the best way to travel is by book anyway, she has always read,always written. GB now has two grown-up children, the world’s most imperious cat, a house full of books and a hard drive full of manuscripts (though some will never be allowed out of a locked basement).