I'm delighted to be sharing my review for Sophia Cobbs Wondrous World of Witchcraft and Misery by Sophia Cobbs as part of the blog tour today. First of all let's take a look at the description for the book... 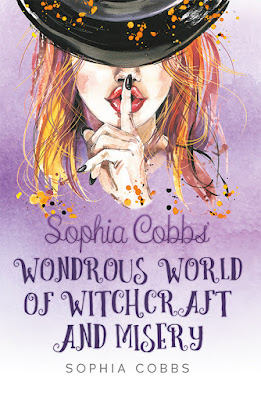 Genre: Fantasy
Release Date: 5 December 2017
Publisher: Silverwood Books
Have you ever tried to conjure up the perfect man? It’s not as easy as it might seem, even if you are a powerful and intelligent witch.
Petulia and Miss Level find out that there is more to finding Mr Right than just a flick of the wand, and poof…there he is! Their latest attempt is gorgeous – as long as you don’t mind the horns and the singing, which of course they do. But when they try to fix him they run into some serious problems. To make things even more complicated, a mysterious and handsome stranger appears. But there is something not quite right about him either…
Will Petulia and Miss Level be able to fix everything and can they use their witchcraft to overcome misery?
BUY LINKS
AMAZON UK: https://goo.gl/6MdEvF
AMAZON US: https://goo.gl/Go91h3
KOBO: https://goo.gl/Br8wnb
SILVERWOOD BOOKS: https://goo.gl/g74xgr

A muffled conversation between Petulia and Miss Level was a distraction for all the people in the audience, but they didn’t care. They were talking about important things. Like the weather. For some people this might have been a good indication of how badly the actors were performing. I mean, if the weather appeared to be more tantalising than the arts, there could only be something wrong with the arts. Unless the weather was actually extraordinary. I can understand that a hurricane would be very interesting, but the question is: who would go to the theatre in a hurricane?
Clearly Petulia and Miss Level. It makes you wonder if there actually were people around for them to distract. In any case, a performance during a hurricane has a valid reason for being below average. The actors were probably wondering how long the roof would hold up, and they had to shout to be heard over the howling wind.
When one of them finally noticed that the two audience members weren’t even paying attention, he signalled to his colleagues and one by one they left the stage to find safety in the basement of the theatre.
The last one shouted, “Switch off the lights before you leave,” which made Petulia raise her hand in affirmative response.
And then they were alone.
“Finally! It took them long enough.” Petulia grabbed her canvas bag from the seat next to her and stood up.
“Well, you know how daft actors are.” Miss Level waited for Petulia to squeeze past her between the rows of chairs, then picked up her own bag and followed. Instead of going to the exit, they crossed the room and walked up to the stage. Petulia fished a piece of chalk out of her bag and started to draw a pentagram on the floor of the stage. “It’s almost ten o’clock. We’ll never get this done in time.” Three points were already drawn.
“Nonsense. We’ve got all the time in the world.” Miss Level stopped at the first point and put a bowl filled with herbs on the tip. She rummaged through her bag again and found another bowl for the next tip and so on. When the entire thing was drawn and supplied with the right herbs at the right points, Petulia put her hand in her bag again and found two boxes of matches. She threw one to Miss Level on the other side of the pentagram, who, by some miracle, caught it perfectly. Then she checked her watch: 9:59. She glanced up.
“Are you ready?”
Miss Level had a match in her hand, ready to light it on the box. “Ready.”
Petulia kept her eyes on her watch while pulling a match out of her own box. “Now!”
Both women lit their matches, waited a full second with their eyes closed and then blew them out. At the same time as the flames died, the herbs in the bowls caught fire. The women spread their arms and started chanting indiscernible words. The smoke began to whirl around between them, creating a sort of vortex. This went on for ten minutes. Just when Petulia was about to ask if they were doing it right, a shadow appeared in the smoke. First it seemed like the smoke just got darker, heavier. But then it started to dissipate and they could clearly make out the form of a man. The smoke cleared completely and the chanting stopped.
Petulia put her hands on her hips. “Damn it. We did something wrong.”
Miss Level, who had a clear view of the man’s naked backside and was very distracted by it, asked, “What?”
“He’s not supposed to have horns.”


Miss Level’s eyes slowly roamed up the man’s body until she could see the unmistakable horns. She grinned. “Well, at least he doesn’t have a tail this time.”

In a way I wasn't quite sure what to expect when I first started reading this book but I was happy with the direction the story took. Even though at times I had no clue as to what would happen next! There were parts where I was smiling away to myself and there was also a slightly dark humour used especially when Adam was involved.

If you like witches, magic and a fantasy edge to your stories than Sophia Cobbs Wondrous World of Witchcraft could well be a hit for you. It is a relatively short book and I enjoyed reading this book over one evening but it would also be ideal for a lazy afternoon.

I'm guessing there will be a book two as there is an abrupt/cliffhanger ending so I would love to see what will happen next in Petulia and Miss Level's unusual and interesting world. The characters were fun and I enjoyed the interactions between the pair as they argued and tried to fix what had gone wrong with their spells. There is a hint of romance too and I feel as if we have only been shown a hint of their personalities so it would be great to get to know them more. 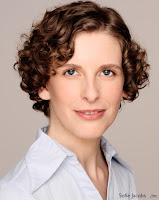 Sophia Cobbs was born in 1982 in Dendermonde, Belgium. She has always had a fondness for writing. In high school she wrote poems and short stories but mostly kept them to herself. This is her first novel.
When she isn’t writing or directing, she is doing one of two things: her day job as Office Manager for an IT company, or scouring wine tastings with her long-term boyfriend.