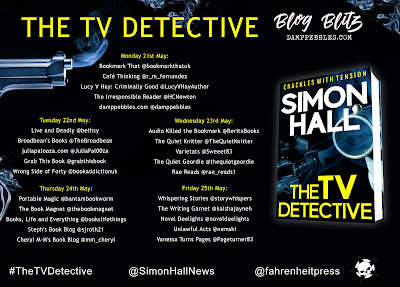 I'm delighted to be joining the blog tour for The TV Detective by Simon Hall and sharing my review today. First of all though let's take a look at the description for the book... 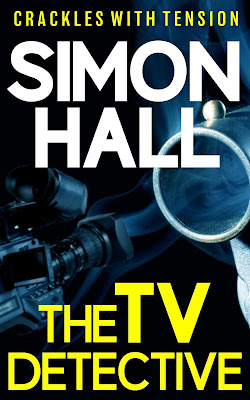 Dan Groves is a television reporter newly assigned to the crime beat and not at all happy about it.

Dan knows next nothing about police work or how to report on it so when he persuades Detective Chief Inspector Adam Breen to allow him to shadow a high-profile murder inquiry it seems like the perfect solution though it soon becomes clear some members of the police force have no intention of playing nice with the new boy.

With his first case Dan is dropped in at the deep-end. A man is killed in a lay-by with a blast through the heart from a shotgun. The victim is a notorious local businessman, Edward Bray, a man with so many enemies there are almost too many suspects for the police to eliminate.

As tensions rise between Dan and the police he comes close to being thrown off the case until the detectives realise that far from being a liability, Dan might actually be the key to tempting the murderer into a trap.

The TV Detective is the first book in a classic crime series from Simon Hall, who until recently was the BBC Crime Correspondent for the Devon and Cornwall area.

The way that police work and television reporting is combined in The TV Detective made for a great premise. I really enjoyed seeing Dan and Breen working together even though they have two very distinct personalities they complimented each other perfectly. With Dan being more open and friendly and Breen more of a closed book. It was great to see Dan so determined in his new role even if at first he wasn't happy with the change.

The TV Detective moves at a good pace with quite a few suspects to keep the reader interested in discovering the killer. I always enjoy playing detective even if I may not be very good at it! In this book after discovering the motives it's safe to say that the victim was not well liked at all. Simon Hall builds up the characters well especially in the case of Adam Breen as more layers to his personality are revealed as the story progresses. Along with getting to see a more personal side to Dan as he ventures into online dating.

On the whole the investigation and personal side to the characters is well balanced. Creating a rounded story with characters I would enjoy seeing again and discovering what the new cases will be. 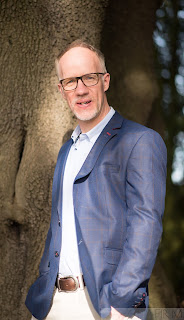 Simon Hall is an author and journalist.

He has been a broadcaster for twenty five years, mostly as a BBC Television and Radio News Correspondent, covering some of the biggest stories Britain has seen.

His books - the tvdetective series - are about a television reporter who covers crimes and gets so involved in the cases he helps the police to solve them. Seven have been published.

Simon has also contributed articles and short stories to a range of newspapers and magazines, written plays, and even a pantomime.

Alongside his novels and stories, Simon is a tutor in media skills and creative writing, teaching at popular Writers’ Summer Schools such as Swanwick and Winchester, on cruise ships and overseas.

Simon has also become sought after as a speaker, appearing at a variety of prestigious literary festivals. His talks combine an insight into his writing work, along with some extraordinary anecdotes from the life of a television reporter, including the now notorious story of What to do when you really need a dead otter.

Now 49 years old, he began a broadcasting career as a DJ on the radio and in nightclubs, then moved into radio and TV news. He worked in Europe, London, Ireland, and the south west of England, before settling in Cambridge.

Simon is married to Jess, Director of Libraries at the University of Cambridge, and has an adopted daughter, Niamh. She’s an army officer, which makes her father both very proud and very nervous.

Simon lectures on careers in the media at Cambridge University, and in schools and colleges. Amongst his proudest achievements, he includes the number of young people he has helped into jobs in broadcasting, and aspiring writers into publication.