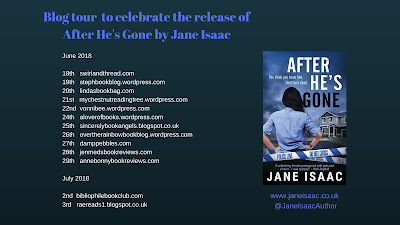 I'm delighted to be sharing my review for After He's Gone by Jane Isaac as part of the blog tour today. First of all though let's take a look at the description for the book... 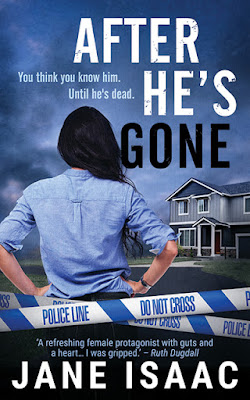 ‘The safety catch on the Glock snapped as it was released. Her stomach curdled as she watched the face of death stretch and curve. Listened to the words drip from his mouth, ‘Right. Let’s begin, shall we?’

When Cameron Swift is gunned down outside his family home, DC Beth Chamberlain is appointed Family Liaison Officer: a dual role that requires her to support the family, and also investigate them.
As the case unfolds and the body count climbs, Beth discovers that nothing is quite as it appears and everyone, it seems, has secrets.

So I have to admit that this is the first book that I have read by Jane Isaac but if this book is anything to go by then I have definitely been missing out. The opening to this story easily got my heart thumping, I couldn't wait to see how everything would turn out!

Beth is a wonderful character with a strong and determined personality however there is also a caring side as she wants to do her job to the best of her ability. Jane Isaac introduces Beth brilliantly along with creating a story that balances things out perfectly. The reader experiences both the more personal side along with being able to see the investigation pick up speed as secrets come to light. In a way you get the best of both worlds seeing not only the investigation unfold but also feeling that deeper connection with the families and experiencing their reactions.

After He's Gone has a very tangled web of secrets and I was eager to try and figure everything out. With revelations around every corner this book easily kept me on my toes. The pace was strong and moved effortlessly keeping me interested throughout. Along with slowly but surely creating a tension that had me turning those pages even faster and I refused to put it down until I finished that last page. It is the perfect start to a new series and I'm really looking forward to the next case!

After He's Gone has plenty of secrets, tense moments and engaging characters to keep you completely invested in the story!

With thanks to Jane Isaac for my copy.

Jane Isaac lives with her detective husband (very helpful for research!) and her daughter in rural Northamptonshire, UK where she can often be found trudging over the fields with her Labrador, Bollo. Her debut, An Unfamiliar Murder, was nominated as best mystery in the 'eFestival of Words Best of the Independent eBook awards 2013.' The follow up, The Truth Will Out, was nominated as ‘Thriller of the Month – April 2014’ by E-Thriller.com.

Connect with Jane at www.janeisaac.co.uk .