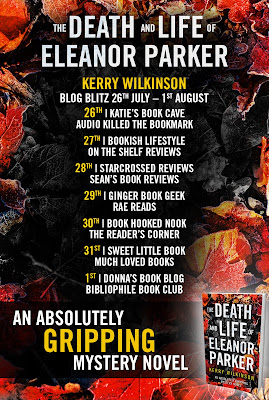 I'm thrilled to be one of the stops on the blog tour for The Death and Life of Eleanor Parker by Kerry Wilkinson. Today I will be sharing my review but first of all let's take a look at the description for the book... 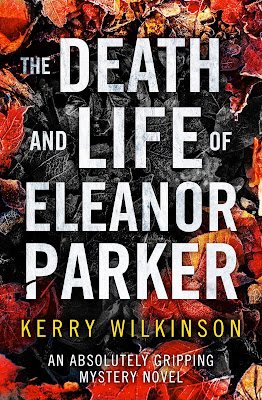 ‘I will never forget the night I drowned…’

Seventeen-year-old Eleanor Parker wakes up cold and alone in the river that twists through her quiet village. She remembers a hand on her chest, another on her head, water in her throat, those final gasps for air…

Her brother’s girlfriend was drowned in the same river the summer before, held under the water by an unknown killer.

Determined to unlock the mystery of what really happened that night, Eleanor can't escape the feeling that something terrible links her to the previous summer's murder. But will she discover the shocking truth, before it’s too late?

A gripping and extraordinary coming of age novel that will keep you guessing until the very end.

After reading the description I knew I had to read this book I love a good mystery so when I read that there was an added paranormal element I was definitely intrigued. The opening easily pulled me in as we meet Eleanor who finds herself in a very disturbing situation. I loved how the character of Ellie was explored as she begins her own investigation and looks to her friends for answers. Ellie is a typical teenager until one night something turns her life upside down and sets her on a path to discover exactly what happened to her.

Everything was revealed in small pieces but this helped to create a very intriguing story where I was desperate to discover the truth. This makes the pacing pretty steady but I liked how this drew me in even more with lots of questions that I had to find the answers to. Along with worrying over who to trust as everyone in Ellie's life could be a suspect! While reading it felt as if there was a dark and ominous shadow hovering over the entire story which creates a wonderful tension.

The Death and Life of Eleanor Parker is the type of book where I would love to talk about all the little things that happened and this for me is the sign of an engaging and brilliant book. However I'm trying to be as vague as possible as it really is a must to see for yourself all the interesting twists and turns that this story takes and I would hate to spoil that for anyone.

Even though this is a YA story I would still say that it appeals to an older audience I am way past my teenage years at 34 years old but there is something about the story that captured my attention perfectly. I have to say that one of these things is definitely Ellie's character who is a brilliant creation using sarcasm, humour and straight talking even after everything she has been through.

This is definitely a mystery with a difference that will grab hold of you until the truth is finally revealed!

With thanks to Noelle at Bookouture for my copy. 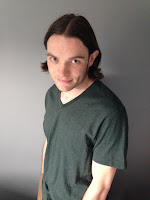 Kerry Wilkinson has had No.1 bestsellers in the UK, Canada, South Africa and Singapore, as well as top-five books in Australia. He has also written two top-20 thrillers in the United States.

As well as his million-selling Jessica Daniel series, Kerry has written the Silver Blackthorn trilogy - a fantasy-adventure serial for young adults - a second crime series featuring private investigator Andrew Hunter, plus numerous standalone novels. He has been published around the world in more than a dozen languages.

Originally from the county of Somerset, Kerry has spent far too long living in the north of England, picking up words like 'barm' and 'ginnel'.

When he's short of ideas, he rides his bike or bakes cakes. When he's not, he writes it all down.