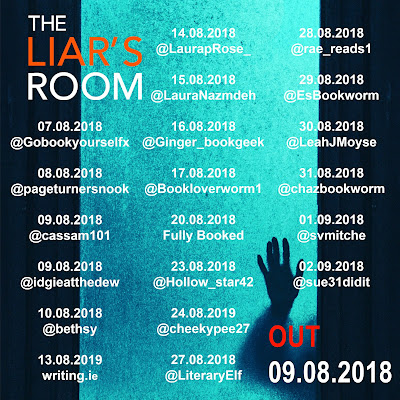 I'm thrilled to be taking part in the blog tour for The Liar's Room by Simon Lelic as part of the blog tour today. First of all though let's take a look at the description for the book... 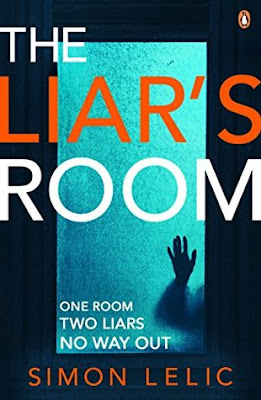 ONE ROOM. TWO LIARS. NO WAY OUT...
Susanna Fenton has a secret. Fourteen years ago she left her identity behind, reinventing herself as a counsellor and starting a new life. It was the only way to keep her daughter safe.
But everything changes when Adam Geraghty walks into her office. She's never met this young man before - so why does she feel like she knows him?
Then Adam starts to tell her about a girl. A girl he wants to hurt.
And Susanna realises she was wrong.

She doesn't know him.

BUT HE KNOWS HER.

AND THE GIRL HE PLANS TO HURT IS HER DAUGHTER...

I'm not quite sure where to start other than to say that make sure you leave enough time when you pick up this book to read it in one go! There is such an addictive feel to the plot with so many questions not only about Adam but Susanna too. There is a tense and pretty chilling vibe to the story as everything slowly unravels revealing secrets and lies that kept me glued to my Kindle.

I'm going to be pretty vague about the plot as it is so worth discovering all the little twists and turns for yourself. What I will say is that The Liar's Room is heavily concentrated on just the two characters but what compelling characters they are flaws and all. They managed to hold my attention throughout as the past is very much brought out into the open. I was constantly trying to guess what would happen next and I loved being kept on my toes.

The Liar's Room had some shocking revelations and it could be disturbing at times but there is also an emotional edge as you get to know the characters more and see how their pasts have played a part in the future. Simon Lelic has created a very clever and compelling story that will capture your attention with some tense and dark moments.

With thanks to Hannah Ludbrook for the tour invite and for my copy via Netgalley. 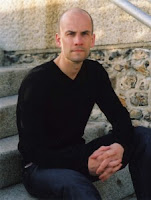 I was born in Brighton in 1976 and, after a decade or so living in London and trying to convince myself that the tube was fine, really, because it gave me a chance to read, my wife and I moved back to Brighton with our three young children. That Barnaby, Joseph and Anja’s grandparents happened to live close enough by to be able to offer their babysitting services was, of course, entirely coincidental.
As well as writing, I run an import/export business. I say this, when people ask, with a wink but I fool no one: I am more Del Trotter than Howard Marks. My hobbies (when I have time for them) include reading (for which I make time, because I can just about get away with claiming this is also work), golf, tennis, snowboarding and karate. My weekends belong to my family (or so my wife tells me), as does my heart.
I studied history at the University of Exeter. After graduating I was qualified, I discovered . . . to do an MA. After that I figured I had better learn something useful, so took a post-grad course in journalism. I know, I know: so much for learning something useful. After working freelance and then in business-to-business publishing, I now write novels. Not useful either, necessarily, but fun and, in its own way, important.
In half a page, then, that’s me. My wife wanted me to add that I am not as mean as I look in my author pic. That was the publisher’s doing: they wanted austere. But now I’ve gone and ruined it.
Author Links