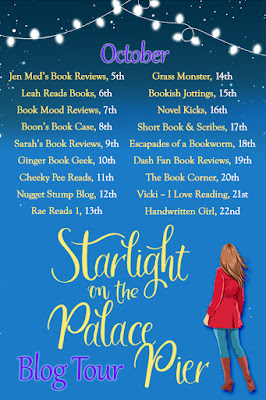 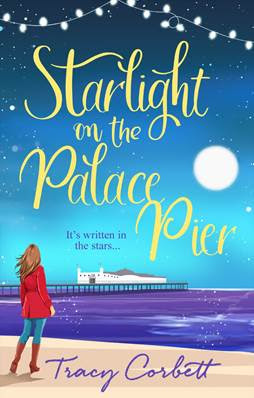 After an injury derails her dream of becoming a professional dancer, Becca Roberts heads home to Brighton in search of a fresh start.

And, when a part-time dance teacher role becomes available at The Starlight Playhouse, it seems like her stars are finally aligning. The crumbling old playhouse might need a bit of tender loving care (and a lick of paint!), but Becca is more than up to the challenge.

That is until Becca’s first love (and first heartbreak), Tom, waltzes into the Starlight Playhouse, and she realises life by the sea might not be as simple as she thought…

Fall in love on Palace Pier in this feel-good romantic comedy, perfect for fans of Debbie Johnson and Jill Mansell.

What a gorgeous story this is, I loved getting to know Becca, Jodi and Tom as they try to make The Starlight Playhouse a success. There are plenty of scrapes, drama and romance that make this book so enjoyable to read. There is a lovely uplifting feeling to this book as we see people getting the opportunity of a second chance. I thought that this was wonderful way of showing that people who have made mistakes in the past hopefully still get a chance to start afresh.

The story moves at a lovely pace and Tracy Corbett has created some loveable characters who I hoped would get a happy ever after. I enjoyed following all of  the characters as I felt that this gave the story a more rounded feel and the reader really gets to see their personalities shine through!

It was the perfect book to sit back and relax with and this story easily brought a smile to my face, I can't ask for more than that!

With thanks to Sabah at Avon for my copy via Netgalley.

Tracy grew up in Berkshire as part of a large and noisy family. She now lives in a small village in Surrey with her motorbike-loving partner and works part-time for Citizens Advice. She’s worked for the charity for seventeen years in various different roles, including advising prisoners and representing clients in the County Court. She works with an amazing group of volunteers, who give up their time freely to help their community. She also finds it a great avenue for ‘people-watching’, something that as a writer, provides endless inspiration for character development and story ideas.
Away from work, Tracy has been actively involved in amateur dramatics since the age of eleven. She’s acted in many productions, written sketches and directed shows. Her first role was in Aladdin. She played a jewel in the genie’s cave and was told to ‘stand there and sparkle’ – not exactly taxing stuff. While most teenagers spent their free time obsessing with fashion, make-up, pop music and boys, Tracy would often be found prancing around the stage pretending to be Miss Muffet, Bessie the Milkmaid, and her personal favourite, Aurora the Goose. Adulthood brought with it more serious roles, such as Nora in The Dolls House and Maggie in Hobson’s Choice. She’s also played Viola in Twelfth Night and Puck in A Midsummer Night’s Dream. Her favourite role was Geraldine Granger in The Vicar of Dibley.
Tracy started writing in her late twenties, song lyrics, sketches for pantomimes, before attempting her first novel. Several re-writes and numerous writing courses later, she had her first near miss at getting published. Over the years she’s written numerous short stories, a number of which have been published in My Weekly magazine. She’s also been short-listed for several writing competitions, and won 1st prize in the Southern Daily Echo Feature Article competition before finally being published in 2017 with her debut novel The Forget-Me-Not Flower Shop.
Tracy describes her writing style as modern tales of romance, with engaging quirky characters, who overcome adversity, grow as people, and conclude in a satisfying optimistic ending. Her influences include authors Harlan Coben and Jenny Cruise.
Tracy’s ambition is to continue writing novels and making a fool of herself on stage.
at October 13, 2018