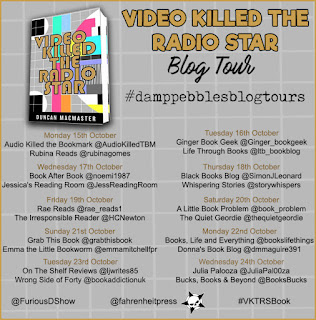 Thank you for stopping by I'm delighted to be one of the stops on the blog tour for Video Killed the Radio Star by Duncan MacMaster and sharing  my review today! First of all let's take a look at the description for the book... 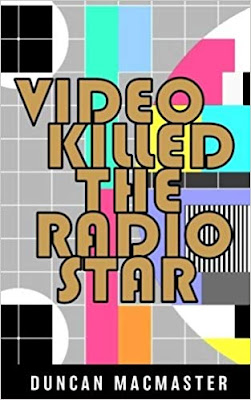 Money in the bank and his dream girl on his arm - life was looking pretty sweet for Kirby Baxter.

Of course it couldn’t last. Where would the fun be in that? This is a sequel after all.

After solving the murder of a movie starlet the previous year, Kirby is doing his best to live down his burgeoning reputation as part-time Interpol agent and amateur sleuth.

Million Dollar Madhouse is a reality TV show where a bunch of washed up celebrities are thrown together in a dilapidated mansion while their attempts to renovate the building are broadcast 24/7 for the viewers delight.

When one of the cast members turns up dead the local police turn to the only celebrity detective in town for help and draft an unwilling Kirby into their investigation.

The first body is only the beginning of another rip-roaring adventure for Kirby Baxter and with Gustav his loyal driver/valet/bodyguard/gardener//chef/ass-kicker at his side, our hero plunges into the fray with his usual stunning displays of deductive reasoning and sheer bloody luck.

I do have to mention that this is book two in the Kirby Baxter series, now I jumped straight in without reading the first book and to be honest I was fine. Duncan MacMaster details some of what happened previously so I felt no confusion. However as with all series if you want a more deeper character background it might be best starting with book one.

In this story we meet Kirby Baxter who is happy with his life and girlfriend but let's put it this way his peace doesn't last long! I really enjoyed the addition of reality TV to the plot it gave a fun spin on the mystery/detective kind of story.

I don't want to give too much away regarding the plot but what I will say is that this book is such a fun and quirky read. I really enjoyed getting to know the characters especially Kirby. Kirby is smart and I loved how he really takes notice of all the little details although this does manage to land him right in the thick of it. There are some larger than life personalities that made this book even more entertaining. I couldn't help but smile away to myself at some of the situations, the writing is witty and light at times which I really enjoyed. It was very easy to get swept along with the plot which moves at a good pace and kept my attention throughout. All in all an engaging story that has a great close knit group of characters that were determined to solve the crime.

There is blackmail, secrets and murder all wrapped up in a mystery just waiting to be solved and Kirby is definitely the guy for the job!

Duncan MacMaster is a writer, pop-culture blogger, and film school survivor from the untamed wilds of Eastern Canada.

When he's not concocting plots for Kirby Baxter to unravel he's posting rants and rages about the business behind pop-culture on his blog.