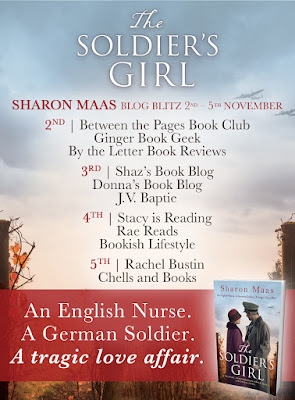 I'm thrilled to be one of the stops on the blog tour for The Soldier's Girl by Sharon Maas and sharing my review today. First of all let's take a look at the description for the book... 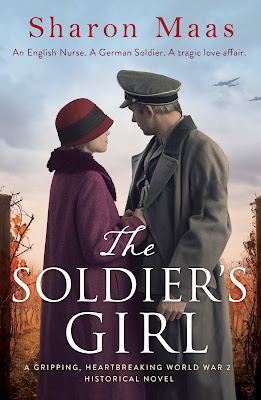 France 1944 and the streets are filled with swastikas. The story of a brave English girl behind enemy lines, a German soldier, and a terrible sacrifice …

When young English nurse Sibyl Lake is recruited as a spy to support the French resistance, she doesn’t realise the ultimate price she will end up paying. She arrives in Colmar, a French town surrounded by vineyards and swarming with German soldiers, but her fear is dampened by the joy of being reunited with her childhood sweetheart Jacques.

Sibyl’s arrival has not gone unnoticed by Commander Wolfgang von Haagan and she realises that letting him get closer is her best chance of learning enemy secrets. Yet despite her best intentions, Sibyl soon finds that betrayal does not come easy to her.

When Jacques finds that Sibyl is involved with the enemy, he is determined to prove himself to her with one last act of heroism. An act that will put all of their lives in terrible danger…

A beautifully written, heart-wrenching and unforgettable tale of love and loss in a time of war. Perfect for fans of The Letter by Kathryn Hughes and The Nightingale by Kristin Hannah.

As soon as I saw the description for this book I knew I had to read it, with the cover making me even more intrigued!

The most wonderful thing about this book is how rich in detail and how beautifully this story is told, I just couldn't put it down! From meeting Sibyl as a child to jumping ahead as she grows and becomes an important part in helping the French resistance.

The historical side to this book was perfect for me as I read about a side to World War II that I hadn't really discovered before. The Soldier's Girl is heartbreaking at times showing both the good, darkness and evil that people experienced. It really felt as if I was a fly on the wall seeing it all play out especially in some of the more emotionally charged moments.

The characters had depth showing the reader that war changed everything and that people did things that they wouldn't necessarily do along with that strong sense of survival. There was danger at every turn for Sibyl and it made this book so addictive for me. Watching Sibyl blend in and assume a different life along with how lines can be blurred. Sharon Maas really brought to life all of Sibyl's fears, hopes and dreams which made her such an interesting character. After finishing this book I am still left thinking about it which is a true sign of an engaging story that definitely makes an impact!

With thanks to Noelle at Bookouture for my copy via Netgalley.

Sharon Maas was born in Georgetown, Guyana in 1951, and spent many childhood hours either curled up behind a novel or writing her own adventure stories. Sometimes she had adventures of her own, and found fifteen minutes of Guyanese fame for salvaging an old horse-drawn coach from a funeral parlor, fixing it up, painting it bright blue, and tearing around Georgetown with all her teenage friends. The coach ended up in a ditch, but thankfully neither teens nor horse were injured.

Boarding school in England tamed her somewhat; but after a few years as a reporter with the Guyana Graphic in Georgetown she plunged off to discover South America by the seat of her pants. She ended up in a Colombian jail, and that's a story for another day...

Sharon has lived in an Ashram in India and as a German Hausfrau--the latter giving her the time and the motivation to finally start writing seriously. Her first novel, Of Marriageable Age, was published by HarperCollins, London, in 1999 and reprinted as a digital edition in 2014. After working as a social worker in a German hospital she finally retired and now has time for her favourite pastimes: reading, writing, and travelling.