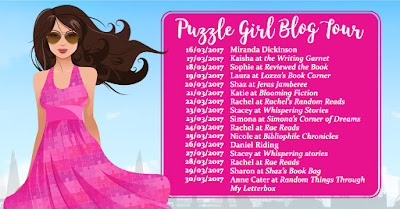 Thank you for joining me for my second stop on the Blog Tour for Puzzle Girl by Rachael Featherstone. On my first stop I shared my review which you can read here

I have a great Guest Post for you today but first of all let's take a look at the description for this fab book.

Blurb:
Love is a riddle waiting to be solved…
Clued-up career girl Cassy Brookes has life under control until one disastrous morning changes everything.
When she finds herself stuck in a doctor’s surgery, a cryptic message left in a crossword magazine sends her on a search to find the mysterious ‘puzzle-man’ behind it.
Cassy is soon torn between tracking down her elusive dream guy, and outwitting her nightmare workmate, the devious Martin.
Facing a puzzling love-life, will she ever be able to fit the pieces together and discover the truth behind this enigmatic man?
Buy Links:
Paperback: http://amzn.to/2jmDjoN
Kindle: http://amzn.to/2iK1a0K

Before I began my writing career, I worked in London as a researcher. So, it is perhaps not too surprising that I enjoy the research element of novel writing. There are three main ways I research a novel:
When it came to doing researching for Puzzle Girl there were a few areas I wanted to explore. Some I had to leave to my imagination such as what excuses you can get away with for visiting a doctor’s surgery when you should be at work!
There was a fair amount I could research via the internet. Google Maps was brilliant when I was looking for phantom locations for the NHS Walk-in Centre and Cassy’s workplace. I chose the City because it is such a busy, vibrant part of London and from there I knew I wanted Cassy to commute to work on the Docklands Light Railway (DLR). I wasn’t going to be using the internet to research the DLR. I loved going on the DLR when I was a child; my grandmother used to talk me for day trips via the DLR.
Cassy uses her commute as a time to plan out her day and in the novel, there are several DLR announcements. I wanted these to be spot on. Is there a mind the gap? So, I did Cassy’s exact commute and made sure I noted down all of the announcements word for word. I must have picked the right train because the DLR’s service manager was on board and he opened up the main control deck. I told him what I was doing and he went through what all the different buttons did and let me take a photo!
After signing with my agent, David Headley, we took a long hard look at Puzzle Girl and we did quite a large re-write. Part of that re-write involved changing Cassy’s job to a Digital Marketing Strategist. Outside of Mad Men I really didn’t know too much about the world of marketing. I went through my LinkedIn and as luck would have it a family friend worked as a Digital Marketing Strategist. I gave him a call and it turned into an hour-long interview. I asked him everything. What his office was like, his hours, what it’s like when you’re going for a promotion. It made the re-write so much easier.
Research for me doesn’t really stop and there’s always a sequel to think about too. So even when Puzzle Girl had been edited by Accent and there were only few months until publication, when I saw a Guardian Masterclass on how to write a cryptic crossword, I jumped at the chance. The course was run over three consecutive Saturday mornings and was taught by John Halpern who sets cryptic crosswords for many of the major newspapers.
John (featured in the pic) talked us through the software that setters use to build the grid and then talked us through some of the common clue types. In week two, we had a try at creating our own clues. It was brilliant fun. We even got to create a crossword as a class in week three. I think Cassy would have loved this course and it’s definitely given me food for thought for a sequel to Puzzle Girl. Watch this space!


Thank you so much to Rachael Featherstone for the brilliant guest post!


Author Bio:
Rachael Featherstone was born and raised in Woodford. After reading Mathematics at New College, Oxford university, Rachael went to work in research. When Rachael's mother was diagnosed with terminal cancer in 2012, Rachael decided to take a chance, quit her job, and fulfil a life time ambition to write a novel. She went back to university and completed a Masters in English Literature and had several short stories published. Rachael now lives in Hampshire with her Husband, Tim. Puzzle Girl is Rachael's debut novel.