I am delighted to be sharing my review for The Little Kiosk by the Sea by Jennifer Bohnet today. There is also a fab giveaway to enter but first of all let's take a look at the description for the book... 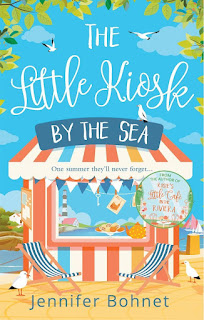 One summer they’ll never forget…
Meet Sabine, desperately fighting to save her little kiosk from closure whilst turning down her friend Owen’s proposals, time and time again.
Cue Harriet, returning to Dartmouth after thirty years, haunted by the scandal that drove her away and shocked by a legacy that threatens her relationship with her journalist daughter.
Enter Rachel, the mysterious newcomer who has an unexpected chemistry with a local widower, and who sets in motion a chain of events she could never have predicted…
One thing’s for sure, as the autumn tide turns, there’ll be more than one secret laid bare!

The beginning was great at introducing the characters, now I guess in a way this did make the story a little bit slower to get started. However it was good to get a feel for everyone so I didn't see this as too much of an issue. I loved that the characters are connected by their past. Even though Sabine and Harriet haven't see each other for such a long time they still manage to pick up their friendship. I guess this is the sign of a true friendship that nothing has changed even though so much time has passed.

The location of the story is beautiful and Jennifer Bohnet has lovingly described a delightful place that I could imagine so easily. There are a few surprises along the way that kept the storyline fresh and interesting. With secrets unfolding that brought the past that had seemingly been hidden right back into the present. With an intriguing story at times that had me especially wondering what had happened in Harriet's past. I would have to say that I was also drawn to BB's story as I have a little bit of interest in genealogy so this part of the story was lovely for me.

There is friendship, love and new beginnings packed into this story and it was so easy to be drawn into this set of characters lives. By the end I honestly felt that I had really got to know them and I was definitely invested in how it would all end. There are varying ages amongst the characters and this gives a more realistic feeling as the story delves into the past and the repercussions on the present.

Heartfelt, warm and comforting is the perfect way of describing The Little Kiosk by the Sea.

With thanks to Neverland Blog Tours for my copy. This is my honest and unbiased opinion. 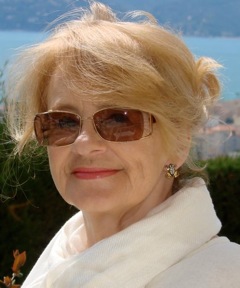 I’m English but I’ve lived in France for the past 17 years. After 11 years down on the Cote d’Azur where Richard my husband was a guardian for a villa, we moved from the Mediterranean coast to a small quirky cottage in Finistere, Brittany. A bit of a culture shock to say the least! When I’m not writing I love reading, cooking and having friends around for lunch - lunches that follow the French tradition of lasting for several hours. The Little Kiosk By The Sea is set in my absolute favourite place in England, Dartmouth South Devon, where we lived for several years before moving to France.

The prize is a paperback copy of The Little Kiosk by the Sea and Rosie's Little Cafe on the Riviera.

The giveaway is UK and EUROPE only with one winner.