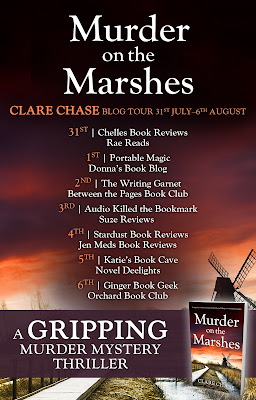 I'm delighted to be one of the stops on the blog tour for Murder on the Marshes by Clare Chase and it's Publication Day!

You can catch my review today but first of all let's take a look at the description for the book... 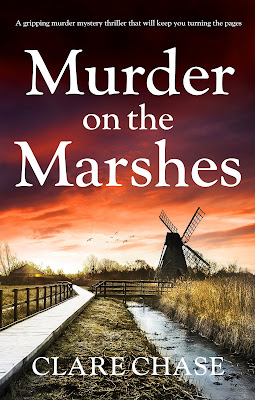 Title:   Murder on The Marshes

Do you love twisty murder mysteries? Meet Tara Thorpe – the clue to a puzzling local murder has landed right on her doorstep. Perfect for fans of Faith Martin, LJ Ross and Joy Ellis.

As the sun rises, a wealthy young woman – Samantha Seabrook – is found drowned in the ornamental fountain of a deserted Cambridge courtyard, the only clue – an antique silver chain wound tightly around her throat.

It’s Tara Thorpe’s job to discover what happened to Miss Seabrook – but the case becomes personal when she learns that Samantha had been receiving death threats… rather like the one that landed on Tara’s doorstep the night the woman died.

Together with Detective Inspector Garstin Blake, Tara tracks the killer to the dank and dangerous fens on the outskirts of the city.

But there’s something Tara can’t quite admit to Blake about her past – and it could make all the difference to whether they live... or die.

An absolutely gripping page-turner that will keep you hooked until the very last page. The first in a series of unputdownable Cambridge mysteries featuring Thorpe and Blake.

It was really interesting to see the story play out especially from both a journalist and detective's perspective. It gave this story an added edge as people reacted differently to the two people asking the questions. Although to be honest this could be down to Tara and her ability to put people at ease. Both Blake and Tara were intriguing characters especially Tara who has a few secrets of her own from her past. You could feel Tara's fears and worries over the threats she receives, something that is just lurking out of sight waiting to step out. I was never sure what would happen next which made this story all the more intriguing. I thought Clare Chase gave the right bits of information at the right time making sure that there was still tension there to keep me invested along with keeping me on my toes.

I was intrigued not only with Tara's life but also Samantha as her life is slowly unravelled by Blake and Tara. Making sure I couldn't get a handle on who could be behind it all, it was like a giant puzzle just waiting for that last piece to fit!

In a way the setting is a key player in this story as it is described in a way to make you feel as if you are right there. It is a seemingly peaceful place but with some flawed characters and one in particular who you wouldn't want to cross. The pace is pretty steady throughout although not necessarily always moving at a fast speed. However this gives the reader chance to digest what they have read along with getting a feel for Tara and Blake's characters. Which is perfect as this is the start of a new series and I'm already looking forward to seeing what is in store for them in the nest book.

Tense at times and unpredictable!

With thanks to Noelle at Bookouture for my copy.

Clare Chase writes women sleuth mysteries and recently signed a three-book deal with Bookouture for a new crime series set in Cambridge. The opening book, Murder on the Marshes, is available for pre-order and will publish in July 2018. The mystery follows investigative journalist Tara Thorpe as she teams up with Detective Garstin Blake to solve the murder of a young female professor at Cambridge University. The case takes them through the dark underbelly of Cambridge and in to the murky fens that surround the centuries-old city. The second and third books in the series are scheduled for publication in late 2018/early 2019.

After graduating from London University with a degree in English Literature, Clare moved to Cambridge and has lived there ever since. She's fascinated by the city's contrasts and contradictions, which feed into her writing. She's worked in diverse settings - from the 800-year-old University to one of the local prisons - and lived everywhere from the house of a Lord to a slug-infested flat. The terrace she now occupies, with her husband and teenage children, presents a good happy medium.

As well as writing, Clare loves family time, art and architecture, cooking, and of course, reading other people's books.

Clare’s debut novel, You Think You Know Me, was shortlisted for the Novelicious Undiscovered Award 2012, and an EPIC award in 2015. It was also chosen as a debut of the month by Lovereading.

You can find Clare's website and blog at www.clarechase.com