The Good, The Bad & The Rugby by Mark Farrer #BlogTour #TheGoodTheBadTheRugby @mark_farrer @damppebbles 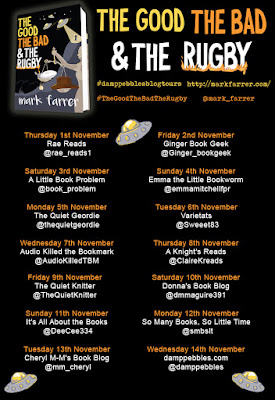 Thank you for stopping by I'm delighted to be stop number one on the blog tour for The Good, The Bad & The Rugby by Mark Farrer. 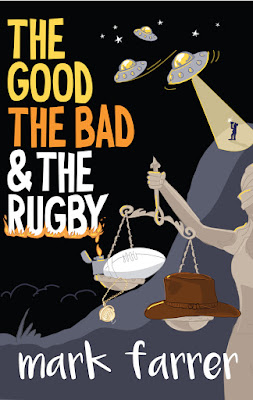 Getting to the truth. By trial… and eror error.

Cullen is on jury duty, and the sleepy Scottish town of Melrose is experiencing a rare crime wave: the famous Rugby Sevens trophy is stolen, a dead body is unearthed, there is a spate of petty arson, and someone drives a van into Gloria’s front room.

Why? And what is her husband doing every night up on Eildon hill?

In this hilarious crime romp, misguided loyalties, thwarted love, and unbelievable gullibility reach crisis point on the one day in the year when the world pays a visit to Melrose.

At the final whistle, Cullen will ensure that justice is done.

I wasn’t quite sure what to expect when I first picked up this book. It all seemed very intriguing and I was looking forward to seeing which way the story would go.

It didn’t take me long to be pulled into this what I can only describe as a crazy ride of a story. What an interesting selection of characters, they had me in stitches at certain points with their actions. I enjoyed the fact that you got such a broad range of characters who all have their various quirks. Overall I think Mark Farrer has created a well balanced story of both lighter comical moments along with the odd darker moment too.

The story had quite a few different strands but I thought that they were woven into the plot in a way that made me just that little bit curious to see what would happen next. To begin with it did take me a minute or so to get straight in my head where the story was when the characters perspective changed but after a while it was much clearer for me and it began to feel a lot more natural. The plot moves at a fairly decent pace which easily kept my attention throughout. I couldn’t wait to see how everything would come together and seeing how it would all end of course.

With thanks to Emma at damppebbles blog tour and the author for my copy.

Mark was born in Liverpool, studied Computer Science at Hull University, then had a successful career in IT management in London and the South-East for twenty years before moving to Edinburgh in 2001. He continued working in IT until 2015 when he decided to retire from the rat race and focus on becoming a writer. He now spends half his time writing and the other half worrying why he is not yet making money from writing.

The Good, The Bad & The Rugby is Mark’s third comic novel featuring a morally righteous loner called Cullen. He also has a perma-free novella on Amazon, called Dirty Barry, which tells how Cullen and Big Paul first met. He is currently at work on a second novella, called Bronchial Billy.

Mark has three children, one at University, one on a gap year in Ghana, and one still at High School. He lives with his partner Claire, a photographer, near West Linton, in the Scottish Borders.