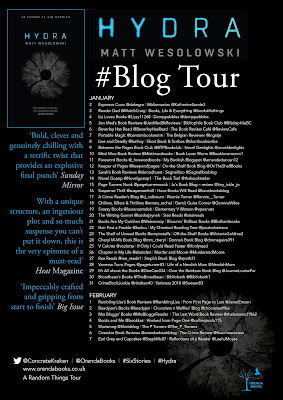 Thank you for stopping by I'm thrilled to be taking part in the blog tour for Hydra by Matt Wesolowski. I will be sharing my review today but first of all let's take a look at the description for the book... 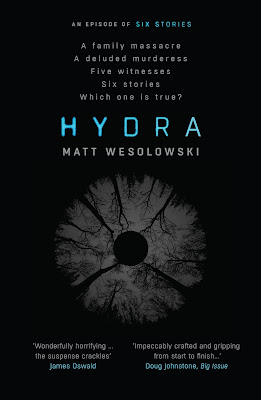 A family massacre. A deluded murderess. Five witnesses. Six Stories. Which one is true?

One cold November night in 2014, in a small town in the northwest of England, 21-year-old Arla Macleod bludgeoned her mother, stepfather and younger sister to death with a hammer, in an unprovoked attack known as the Macleod Massacre. Now incarcerated at a medium-security mental-health institution, Arla will speak to no one but Scott King, an investigative journalist, whose Six Stories podcasts have become an internet sensation.

King finds himself immersed in an increasingly complex case, interviewing five key witnesses and Arla herself, as he questions whether Arla’s responsibility for the massacre was as diminished as her legal team made out. As he unpicks the stories, he finds himself thrust into a world of deadly forbidden ‘games’, online trolls, and the mysterious black-eyed kids, whose presence seems to extend far beyond the delusions of a murderess… Dark, chilling and gripping, Hydra is both a classic murder mystery and an up-to-the-minute, startling thriller that shines light in places you may never, ever want to see again.

With me not reading Six Stories I did wonder if I would be left a little confused starting with Hydra but I had absolutely nothing to worry about as Hydra is easily classed as a standalone. Although after reading this story I really must find the time to pick up a copy of Six Stories. I guess it took a couple of pages to get used to the style and format of this story however once I got into the rhythm of the podcast style it just felt so refreshing to be reading something just that little bit different. With a story that at times pulled me out of my comfort zone especially after reading certain parts I'm surprised I didn't have to sleep with the lights on! I have to admit to being fully creeped out by the idea of the black-eyed children it gave an extra edge to an already dark story. I have admitted before in previous reviews that I can be a scaredy cat and at times whilst reading I felt like looking over my shoulder but at the same time not wanting to in case I saw something I really didn't want to see. That's how well Matt Wesolowski's writing pulled me in.

Hydra really is such an intriguing story posing the important question as to why would a young woman commit such a horrific crime. That is the great thing about the premise there is no question over the identity of the killer. This book looks to find the motive or reasoning behind the crime. I really couldn't wait to discover the truth and I loved how each podcast added more layers making it an even deeper and intriguing story.

The writing style is direct and for me the podcast style really made the book even more addictive. I was relieved that I could read on to find out more details rather than having to wait for the next episode as I would have done if it was a real podcast. There were plenty of moments where I was completely engrossed in what I was reading and I felt as if I was truly caught up in Arla's story.

I can't recommend this book enough especially if you are looking for something slightly different. Hydra is dark, gripping and so enthralling. It will entertain, make you think and leave you at times just that little bit unsettled!

With thanks to Anne Cater & Orenda Books for my copy. This is my honest and unbiased opinion.

Matt Wesolowski is from Newcastle-Upon-Tyne in the UK. He is an English tutor for young people in care. Matt started his writing career in horror, and his short horror fiction has been published in numerous UK- and US-based anthologies such as Midnight Movie Creature Feature, Selfies from the End of the World, Cold Iron and many more. His novella, The Black Land, a horror set on the Northumberland coast, was published in 2013. Matt was a winner of the Pitch Perfect competition at Bloody Scotland Crime Writing Festival in 2015. His debut thriller, Six Stories, was an Amazon bestseller in the USA, Canada, the UK and Australia, and a WHSmith Fresh Talent pick, and film rights were sold to a major Hollywood studio.